Nickelodeon
Register
Don't have an account?
Sign In
Advertisement
in: Cleanup, Shows with wikis, Stubs,
and 3 more

This show has a wiki of its own: Miraculous Ladybug Wiki.

4 (+3 in production; only Season 1 were aired on Nickelodeon)

93 (only the Season 1 episodes were aired on Nickelodeon)

In the United States, Nickelodeon briefly aired the first season from December 2015 to October 2016. The show later moved to KidsClick from 2017 to 2019 and now airs on the Disney Channel.

[In] Modern-day Paris, Marinette and Adrien are two high school kids with a difference: they are the chosen ones to save Paris from evil! They have been entrusted with an important mission – to capture akumas, creatures responsible for turning normal people into super-baddies. When involved in such adventures, these two school kids become superheroes: Marinette transforms into Ladybug and Adrien becomes Cat Noir. But Ladybug and Cat Noir do not know each other’s true identity. Marinette is unaware that, beneath the Cat Noir costume nestles Adrien, her secret crush. Similarly, Adrien doesn’t know that Ladybug is, in actual fact, just Marinette - one of the girls in his class. Will they overcome the forces of evil together?[1] 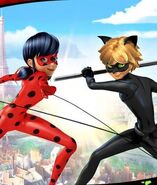