"I need a smoothie."

Miriam Pataki is pretty much just mopes and sleeps around the house all day, mostly indifferent to everything around her. "Olga Comes Home" suggests that Miriam has depression: when Bob says that Olga can't mope around being depressed in her bed, Miriam says: "Sure she can, I do."

She is also an alcoholic; she passes out all the time (and is disoriented when she wakes up), and slurs her words. Miriam often is seen making "smoothies", which is how she names her alcoholic beverages, and seems to be emotionally attached to her blender.

Miriam, like Bob, greatly favors Olga over Helga, and tends to neglect her and forgets to pack her lunch frequently (likely as a consequence of her alcoholism and lack of motivation, not as something intentional on her part). However, she does show ample concern for Helga. She often checks on Helga to make sure she is okay, and has been seen to bond well with her on multiple occasions.

Miriam is a tall, thin, middle-aged woman with short blonde hair, square glasses, purple earrings, and a dress. In the firstand second seasons, Miriam's dress was green, but from Season 3 onward, her dress is mauve. Miriam's face also became more rounded in Season 4.

Miriam is Olga and Helga's mother, although in the present she doesn't fulfill the "mother" role too well, being very unattentive of Helga, and only sobering up when Olga comes visit. This is partly caused by her alcoholism, which ensures any progress she makes towards being a better mother is reset eventually.

Miriam's alcoholism has also gotten her busted for at least one DUI, as in "Helga and the Nanny", Bob mentions Miriam's community service job at the animal shelter, and in "The Beeper Queen", Arnold asks Helga if Miriam has gotten her driver's license back, and Helga states that she has not. In The Patakis, Miriam was supposed to be shown twelve-stepping.

In truth, Miriam has a lot of hidden potential, and she can surprise people with what she can do when given the chance. At one time she was a world-class swimmer, but she dropped out of college to get married ("Olga Gets Engaged") and eventually came to regret it. She also won a bull-riding title in her youth, and is a pretty good karaoke singer ("Road Trip"). Miriam was also very successful in running Big Bob's business when he was injured. All of this hints that Miriam was once a promising young woman with a bright future, but dropped everything to marry Bob, which finished with her aspirations. In the present, Miriam's alcoholism might be a way for her to cope with her dysfunctional marriage, which holds back all her potential.

Miriam mentions in "Road Trip" that when she was 15 during the Summer of Love, which was in 1967. This places her birth year around 1952, and her age at approximately 46. 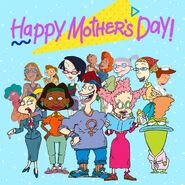 Add a photo to this gallery
Retrieved from "https://nickelodeon.fandom.com/wiki/Miriam_Pataki?oldid=240321"
Community content is available under CC-BY-SA unless otherwise noted.