Sister: Macy
Mitzi is a supporting character in Winx Club. She is Bloom's rival from her hometown of Gardenia.

Mitzi is voiced by Daniella Monet, who is known for her other Nickelodeon role as Trina Vega on Victorious.

Mitzi wears blue-tinted glasses, a green tank top, and yellow khaki capris. She has black hair parted to one side and fair skin.

Mitzi used to be Bloom's neighbor and classmate while Bloom lived in Gardenia. She is selfish and holds a strong grudge against the Winx, going as far as to side with their nemeses (the Trix and the Wizards of the Black Circle). Mitzi's younger sister, Macy is her polar opposite, a caring nature lover who befriends the Winx. 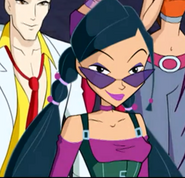 Add a photo to this gallery
Retrieved from "https://nickelodeon.fandom.com/wiki/Mitzi_(Winx_Club)?oldid=260876"
Community content is available under CC-BY-SA unless otherwise noted.