On Nickelodeon, Quirk was the referee of the game show Nickelodeon GUTS for four seasons. She is also known as the voice of Brit Crust in the Nickelodeon animated series My Life as a Teenage Robot. She was also on Figure It Out, Clarissa Explains it All, What Would You Do?, The Big Help, The Wild Thornberrys, The Wild Thornberrys Movie, U to U, Hey Arnold!, Sanjay and Craig and the “Nick Live!” tours. 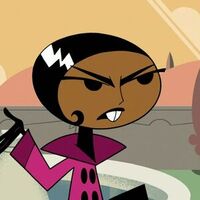