Teenage Mutant Ninja Turtles: Out of the Shadows

The film was initially set to be released in 2015, albeit it was frequently delayed for two years until it was finally released in 13 January 2017. It first premiered in France on 16 December 2016 before its release in the United States.

Terravex Oil is in the midst of a fracking operation near a lake in North Dakota, overseen by CEO Reece Tenneson and geologist Jim Dowd. The operation releases three subterranean creatures from an underground water system and destroys the drilling rig. Two are captured by Terravex, but one of them escapes the site. Meanwhile, high school senior Tripp Coley is looking for something to do to escape the life of his family; his parents are divorced, his mother Cindy is in a relationship with Rick, the town's sheriff, who fails to take him seriously. That is why he has taken up a part-time job at a local junkyard, where he builds a pickup truck in hopes of being able to leave his town. But the truck doesn't have a working drivetrain to put his plans to action. One night, Tripp encounters the escaped creature in the junkyard and captures it, but the creature escapes before he can seek authorities.

The next day Tripp, along with classmate Meredith (who is tutoring Tripp in biology), finds the creature has a diet of oil and it takes shelter within the hood of his truck. He quickly befriends him, names him Creech, and promises to help him get home. Tripp modifies the truck to give Creech more control over the truck as a makeshift engine, the truck essentially acting as a 'wheelchair' for Creech to operate on land, and Meredith becomes quite impressed and surprised at Creech's speed and talent. Meanwhile, Tenneson is still concerned about the incident at the drilling rig that exposed Creech, since similar experiments have revealed the existence of other creatures. He decides to protect the company's image by drilling poison into a hole leading to the underwater tunnels, and by sending hired mercenary Burke to kill their captured creatures, to the objection of Jim, as he finds the monsters have significant intelligence and emotions, as well as a hive mind intelligence that allows both of the captured specimens to learn what was only directly taught to one.

Tripp and Meredith go see Tripp's father Wade to seek help, but Wade sells Tripp out to Burke. Tripp and Meredith escape in the truck with Creech, but not before destroying Wade's trailer. Tripp, Meredith and Creech are chased by Burke and his team along with Rick. Tripp, Meredith and Creech manage to escape by jumping over a train, and camp at a hunting cabin owned by Meredith's father near the lake, while Rick chastises Burke for attempting to follow them himself.

When Creech gets the sense something bad will happen to the other creatures, he heads to the Terravex headquarters where the other creatures are being held captive. Tripp and Meredith follow Creech using Meredith's cellphone, as Tripp left his phone in the truck. When they arrive, they find Creech's parents, but are attacked by Terravex workers. Creech arrives and is captured; Tripp and Meredith are taken to Tenneson, and he tells them to forget about Creech along with his parents and has Burke escort them out.

Sympathetic to the creatures' plight, Jim decides to help Tripp and Meredith rescue the creatures. With the help of Tripp's junkyard boss, Mr. Weathers, they acquire two more trucks, one being a repossession from a rich teen who had failed to make payments, and another being the birthday present of his friend Sam Geldon, whose father owns a local car dealership. They modify the trucks for Creech's parents to control similar to Creech in Tripp's truck. Jim helps the group by stealing the Terravex truck on which the monsters, Creech's parents, are loaded on. At the dealership, the creatures take control of the modified trucks based on Creech's own experience, and the group make their escape up the mountain leading to the tunnels.

Terravex gives chase up the mountain and the group escape by using the trucks to jump over the edge of the mountain. On the way, Rick helps Tripp and the group escape from Burke, preventing Burke from ramming them off the road and later stealing a large truck to block the road to prevent further pursuit. After realizing the poison has been inserted, Tripp gets into a head-on battle with Burke, who attempts to push him into the drilling hole, but ends when Tripp and Creech overturn Burke's truck, destroying the poison machine and killing Burke when his truck is thrown into the equipment, only for Tripp to fall into the hole. Creech saves him from drowning before he and his parents depart back home and Terravex is exposed by the group for the experimentation that was harming the creatures' habitat. Tenneson is arrested[further explanation needed], Tripp and Rick develop on good terms and together build a new engine for the truck, and Tripp and Meredith begin a relationship. 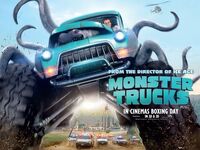