Kind but Antagonistic, Slimy, Always picking his nose and He has a propensity for firing executives on a whim for the most insane reasons.

Wears a white button up t-shirt with a green bowtie, brown overalls and black shoes.

Mr. Dupette is the CEO of Conglom-O on Rocko's Modern Life. He originally appeared in the episode "Canned" as the boss of Super Lot-O Comics, where he fires Rocko at the beginning of the episode. How exactly he became the CEO of Conglom-O is never shown, as some flashbacks of Conglom-O's early years depict him as being with Conglom-O during events set well before "Canned", but others do not (such as when Rachel Bighead turned down his father's offer of a job at the company in "I Have No Son!").

Dupette is almost always shown picking his nose, although sometimes he has a personal assistant pick his nose for him. Despite his official job title of "Slimy Boss" and propensity for firing executives on a whim for the most insane reasons, Dupette is a staunch environmentalist thanks to Rocko's efforts (in the episode "Zanzibar!") and he also secretly enjoys performing as a clown at children's birthday parties (in the episode Closet Clown"). In fact, he is actually a kind boss to his employees. He is also a golf pro and, as his original job suggests, a big comic book fan.

In Rocko's Modern Life: Static Cling, after Conglom-O files for bankruptcy due to a clerical error, Mr. Dupette commissions for a new Fatheads special to be produced. At the end, he and his company are flown into space, presumably never to be seen again. 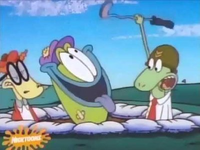 Mr. Dupette: If this flops, Cut sound (As he gives a dire warning to Ed Bighead about the reboot of The Fatheads tv show.)!