Mr. Hyunh is a fictional character in Hey Arnold!.

Mr. Hyunh is an immigrant from Vietnam. He was born sometime after 1949 ("Snow"), but he was already a young adult with a baby daughter in 1975, when the Vietnam War came to its dramatic climax.

At the conclusive battle of the war (the Fall of Saigon), the United States sent helicopters to evacuate South Vietnamese citizens. Mr. Hyunh and many others abandoned their old lives and attempted to board the last helicopter, but the pilot claimed only one more was allowed on board. Mr. Hyunh offered his daughter and she was taken aboard, never to be seen again for many years.

It is unknown what Mr. Hyunh did in the following years, but 20 years after he give his daughter to the helicopter pilot, he managed to arrive to Hillwood from Vietnam to look for his daughter. After the events of "Arnold's Christmas", the two Hyunhs have reconnected.

Mr. Hyunh works at the "El Patio" restaurant. He had a shot at stardom as a country singer, but being a simple man Mr. Hyunh was uncomfortable with the publicity and graciously put aside his star status after his first and only concert.

Mr. Hyunh, like just about everybody else at the Sunset Arms, strongly dislikes Oskar because he thinks he is a slacker. He is also musically inclined; he plays the cello in "Arnold as Cupid," the trombone (in a flashback) in "The Journal," and the guitar (both acoustic and electric).

He has a tendency of describing people and things as "creepy" or "very creepy".

In the episode "Gerald Comes Over," Mr. Hyunh says that he has a cousin who is a good divorce attorney.

In the episode "Gerald Moves Out," Mr. Hyunh doesn't like lint.

The real Vietnamese last name is Huynh, but in the show it's always deliberately misspelled: Hyunh. Pronunciation remains the same though (similar to the word "win"). 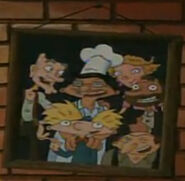 Retrieved from "https://nickelodeon.fandom.com/wiki/Mr._Hyunh?oldid=259482"
Community content is available under CC-BY-SA unless otherwise noted.