Mr. Salt is a salt shaker of French heritage who acts as the homemaker of the Blue's Clues house. He takes care of the other residents and prepares food for them. He and his wife Mrs. Pepper come from Paris, where they worked as cooks. Despite his experience as a chef, Mr. Salt is prone to accidents in the kitchen and often needs the host's help when he is baking. He is voiced by Nick Balaban, one of the show's music composers.

Mrs. Pepper is the mother figure of the Blue's Clues house. She spends much of her time caring for her kids, Paprika and Cinnamon. In her free time, she likes to sing with Mr. Salt and swim in the kitchen sink. She is commonly shown holding Cinnamon in her arms while Mr. Salt holds Paprika. She was voiced by Penelope Jewkes during the first season and by Spencer Kayden for the remainder of the series. 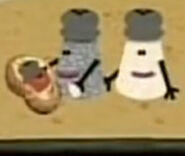 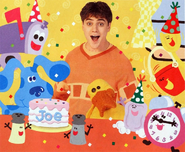