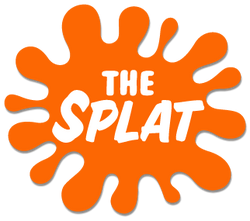 NickSplat was a programming block that began broadcasting as The Splat on TeenNick on October 5, 2015, replacing The '90s Are All That. Differing slightly from its predecessor, the block airs past Nickelodeon shows dating from the 80s, 90s, and sometimes early-mid 2000s, though still primarily focusing on shows from the 1990s. The block was shown each night from 11:00 PM to 6:00 AM EST.[1]. The block also featured themed weeks, live stunts, retro recreations, and its own dedicated website.[2] Since 2018, however, the website now redirects to Nick.com.

The block notably aired some of the last episodes of As Told by Ginger, previously unaired in the US, on the weekend of October 23, 2016.