Nick Jr. (also called Nick Jr. on Nick from 2014 to 2019) is a programming block seen on weekday mornings on Nickelodeon. The block, which premiered on January 4, 1988, is aimed at young children aged two to seven.

Since 2009, the Nick Jr. name has also been used for the separate Nick Jr. Channel.

Throughout the 1980s, Nickelodeon aired programs for preschoolers (most prominently Pinwheel and Today's Special) on weekdays (from 8:00am - 2:00pm) and weekend mornings. After Nickelodeon's preschool block premiered a slew of new shows in 1987, it began using the Nick Junior branding on January 4, 1988 (1988-01-04),[1] coinciding with the premiere of The World of David the Gnome. A new rebrand for the block that abbreviated its name to Nick Jr. was gradually unveiled between September 1988 and mid-1989.[2] Nick Jr.'s new logo was orange for 'Nick' and blue for 'Jr.', and it varied in the shape or species (e.g.: two gears, trains, robots, planets, insects, comets, or elephants). Nick Jr.'s initial network IDs were filmed in live action featuring two children wearing Nick Jr. shirts walking to a refrigerator and opening it, revealing an animated cartoon character. From 1989 to 2000, other companies and animators produced IDs for Nick Jr.

Until July 1990, Pinwheel was featured, originally for three hours (two in the morning and one at noon), then for one hour starting in spring 1989. When Nick Jr.'s original series Eureeka's Castle premiered in September, Pinwheel was split into two separate half hours in the morning and afternoon, where it remained until July 1990. Much of Nick Jr.'s other programs at the time were of Japanese or foreign origin (including Fred Penner's Place, Sharon, Lois & Bram's Elephant Show, Adventures of the Little Koala, Noozles, Maya the Bee, and The Littl' Bits).

On April 5, 1993 (1993-04-05), Nick Jr. premiered a new series, Cappelli & Company, and received a new rebrand which prominently featured a new Nick Jr. logo consisting of an orange parent and a blue child, and the slogan Grow, Learn, and Play. Several Nick Jr. promos and bumpers featured kids playing near the Nick Jr. logo and a theme song with the slogan sung to the melody of London Bridge, and a few featured Cappelli & Company host Frank Cappelli. Nick Jr. also started using a female announcer (who was replaced by a different one in 1994, 1998 and 2003) in its promos and bumpers. Nick Jr. began to invest more into producing original interstitial series (including 1994's Muppet Time, forty two-minute shorts from The Jim Henson Company]]) in order to stay within a self-imposed limit of five minutes of commercials per hour. On April 4, 1994, the "Jim Henson's Muppet Hour" sub-block was created by pairing Muppet Babies reruns with the new acquisition, The Muppet Show. Due to Nick Jr.'s declining ratings as well as competition from PBS' PTV and TLC's Ready Set Learn block, Nick Jr. decided to revamp their on-air branding in 1994.[3]

On September 2, 1994, the Grow, Learn and Play interstitials ended their 1-year run.

On September 5, 1994 (1994-09-05), Nick Jr. rebranded and introduced Face, an animated host that introduced shows and interstitials and led into commercial breaks. In the context of his segments, Face was capable of materializing objects such as an astronaut, a robot, a clown, a window, a traffic light, stars, and even wood. He was also capable of creating a number of foley sound effects and voices including a signature three-note trumpet noise usually following the name "Nick Jr." at the end of almost every bumper. Also, he changed colors, moods, and feelings. Face was voiced by Chris Phillips, who also narrated several Nickelodeon and Nick Jr. promos. The original Face promos were produced by Nick Digital (from 1994 to 1996 and from 2000 to 2003; these promos featured a redesigned Face) and DMA Animation (from 1996 to 2000). In October, Nick Jr. introduced two new original series, Gullah Gullah Island and Allegra's Window, resulting in 50% rating gains for the block.

In 1995, Nick Jr. acquired broadcast rights to The Busy World of Richard Scarry from sister network Showtime, premiered Rupert and Little Bear, two series produced by Nelvana, and aired three episodes of The Adventures of Timmy the Tooth as part of a marketing campaign. On September 8, 1996 (1996-09-08), the first episode of Blue's Clues premiered in prime-time on Nickelodeon, then it debuted on Nick Jr. the next day. Nick Jr. also premiered four new interstitial series and received a new rebrand produced by Pittard Sullivan. Blue's Clues quickly dethroned Gullah Gullah Island as Nick Jr.'s most popular series. On March 16, 1998, the nickjr.com website was launched. Later that year, Nick Jr. rebranded again and introduced the "Just for Me" slogan.

In 1999 and 2000, Nick Jr. replaced most of its older series with newer series such as Franklin, Kipper, Maisy, and Little Bill which helped increase the block's ratings. Nick Jr. briefly aired reruns of Shining Time Station in the Summer of 2000 (Maggie and the Ferocious Beast premiered on the same day that show premiered) to promote Thomas and the Magic Railroad before replacing it with Dora the Explorer, which became one of Nick Jr.'s most successful series.

The US dub of Bob the Builder premiered on Nick Jr. in January of 2001 and Oswald premiered on Nick Jr. in August of 2001. On September 3, 2001 (2001-09-03), Nick Jr. received a new rebrand produced by AdamsMorioka (who had previously rebranded Nickelodeon and Nick at Nite) and Editional Effects. On April 7, 2003, the day sister network Noggin rebranded and introduced Moose and Zee, Nick Jr. aired its three new original series Oobi, Tweenies, and Miffy and Friends; Nick Jr. continued to air Tweenies from July to October.

On August 29, 2003, the original Face interstitials ended their 9-year run.

On September 1, 2003 (2003-09-01), Nick Jr. received a rebrand that introduced more than a dozen new logos; Rubbadubbers premiered the next day. A new interstitial series called Nick Jr. Play Along debuted, which were hosted by two fun live-action hosts: Robin (played by actress Hillary Hawkins) and Zack (played by actor Travis Guba). Alongside Robin and Zack were two sock puppets called the Feetbeats. Face was given a new look which added eyebrows and a chin and straightened his eyes by inverting their colors from white dots on black eyes to larger black dots on white eyes, and was voiced by Nick on CBS announcer Babi Floyd. The new Face promos were produced by Vee-Pee Cartoons. Nick Jr. removed the Play Along interstitials aside from a re-edited opening in February 2004.

On October 8, 2004, the new Face interstitials ended their 1-year run.

On October 11, 2004, Nick Jr. received another rebrand containing interstitials co-produced by Little Airplane Productions featuring the block's new host Piper O'Possum (voiced by Ali Brustofski and created by Josh Selig), and the new slogan "Love to Play!". Nick Jr.'s female announcer was replaced with Kobie Powell and Chris Phillips. Nick Jr. used its new on-screen bug to promote its website, but it was replaced by March 6, 2006 (2006-03-06) after the FCC forbaded that and used Nick Jr.'s 2003–2004 normal on-screen bug again. LazyTown, Miss Spider's Sunny Patch Friends, and The Backyardigans (the latter of which premiering alongside the rebrand) premiered on Nick Jr. in 2004; they were briefly shown on Noggin during Thanksgiving week before joining Noggin's regular schedule later. Between 2004 and 2007, Nick Jr. reduced its reliance on interstitial series and increased the amount of commercials it aired.

On September 7, 2007, the Piper O'Possum interstitials ended their 3-year run.

On January 30, 2009, 3 days before its rebrand as Nickelodeon's Play Date, the original Nick Jr. block aired for the last time with Ni Hao, Kai-Lan being its last show. Also, the Play with Us! interstitials ended their 2-year-run.

On February 2, 2009 (2009-02-02), the original Nick Jr. block rebranded as Nickelodeon's Play Date. The block's branding was based on Noggin's branding, and many bumpers featured drawings, finger puppets or cupcakes. The bumpers' music was a choir of kids vocalizing, and Nicolette Pierini was the announcer of each bumper. On September 28 of that year, the Nick Jr. Channel was launched replacing Noggin. In 2011, Nickelodeon's Play Date received a new rebrand featuring characters from the block's shows. The following year, the Play Date branding was replaced with a modified version of the Nick Jr. channel's new branding known as Nick: The Smart Place to Play. Despite Nickelodeon displaying its shows credits during the last 30 seconds before it since 2012, the branding retained the split-screen credits for Nick Jr. shows airing on the block until May 2, 2014 (2014-05-02).

Starting in the 1990s, Nick Jr. programs, (alongside those of Nickelodeon) have been airing on the AFN network, and then later AFN Family. Some of Nick Jr.’s older programs have been in reruns to this day, such as Blue's Clues, and Go, Diego, Go!, alongside delayed premieres of newer Nick Jr. programs, such as Paw Patrol and Butterbean's Café.

From 1999 to 2009, Nick Jr. shows aired on the Noggin channel as part of a block called Nick Jr. on Noggin. Noggin was eventually relaunched with the streaming service in 2015.

From 2000 to 2002 and from 2004 to 2006, Nick Jr. also ran a Saturday morning children's block for CBS entitled Nick Jr. on CBS, featuring shows from the programming block. Between 2002 and 2004, it was part of the general Nick on CBS block, which also included programming from the main Nickelodeon channel. The block was discontinued on September 16, 2006, when the DiC-programmed KOL Secret Slumber Party on CBS replaced it.

For a brief time in summer 2010, Tr3s (a sister network of Nickelodeon) aired a daily block of Spanish-dubbed Nick Jr. programs under the name Tr3s Jr. Pistas de Blue (episodes from the Steve Burns era of Blue's Clues) and Wonder Pets! were featured in the block.

Face made an appearance during the 2012 New Year edition of The '90s Are All That, TeenNick 's 1990s-oriented late night block. Face's appearances consisted of out-of-context clips that make him appear to be drunk or making adult comments (e.g. "Yeah, grow a pair!"). Face also appeared in an Easter promo for The Splat in 2016.

Since May 1, 2019, reruns of older Nick Jr. series have been airing on a Pluto TV channel known as Nick Jr. on Pluto TV.

Starting in 2020, Nick Jr. shows were added to Paramount+. 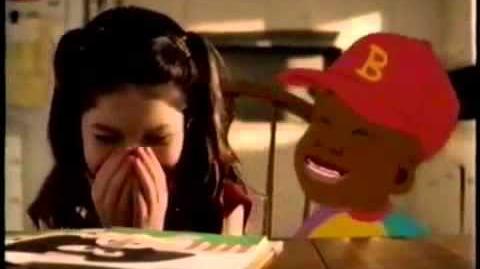 Retrieved from "https://nickelodeon.fandom.com/wiki/Nick_Jr._(block)?oldid=327216"
Community content is available under CC-BY-SA unless otherwise noted.