Nick Jr. Magazine, renamed Nick Jr. Family Magazine from 2003-2007, was published from 1999-2009 by the editors of Nickelodeon Magazine. It was aimed at younger readers, age 3–6 years. The magazine was unique in that it was aimed at both kids and parents - the main magazine had articles for parents to read, and the middle of the magazine had a pull-out magazine called "Nick Jr. Noodle" for kids to read. When the magazine dropped "family" from the title, the cover pictures changed to cartoons instead of pictures of families, in order to appeal more directly to kids instead of parents on the cover of the magazine. Also, award-winning music and toys were featured for kids, families and parents to enjoy. 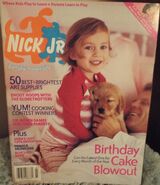 November 2008
Add a photo to this gallery 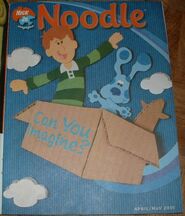 December/January 2007
Add a photo to this gallery

Retrieved from "https://nickelodeon.fandom.com/wiki/Nick_Jr._Family_Magazine?oldid=249225"
Community content is available under CC-BY-SA unless otherwise noted.