Nick News with Linda Ellerbee is a news documentary program that has been airing since 1992. It was the longest running series on Nickelodeon in terms of seasons. The show was hosted by Linda Ellerbee and has been since the show's debut. Nick News has been honored with several awards, including three Peabody Awards and three Emmy Awards.

Nick News has been hosted by Linda Ellerbee since the show's inception in 1992. Ellerbee was one of five candidates auditioned over the course of two weeks. She was chosen because her competitors were "too loud and obnoxious", claimed one of the show's set designers. According to Ellerbee: "I was honored when I was named the host of Nick News. The show will be about kids and their everyday lives." Ellerbee has never missed an episode due to illness. The show is officially known as Nick News with Linda Ellerbee. Throughout the years, Nick News has featured special guests of honor, such as Al Gore, Bill Cosby, Faith Hill, Rosie O'Donnell, Magic Johnson, Bill Clinton, and Dr. Phil.

Nick News was originally known as Nick News W/5 until the show's "who, what, when, where, and why" type format was dropped.

Nick News with Linda Ellerbee has been shown on Sunday nights at 8 p.m. and later 8:30 p.m. on Nickelodeon, and ran in reruns at various time slots. Nick News was #1 in the ratings on Nickelodeon in 1992-1993, and has never gone below #6 in the ratings, making it one of the most consistently highly-rated news shows on TV. The show was also shown in prime time on CBS on Saturdays from 1993 until 1996. From 1995 to 1999, the first-run syndicated version of the show—distributed by Paramount Domestic Television (now CBS Television Distribution)--aired on local stations—both independent and network-affiliated—all over the United States of America.

The show also previously appeared early weekday mornings fully commercial-free as a part of the television cable industry's Cable in the Classroom initiative, which urges teachers from schools around the globe to tape programs of Nick News and then later show them to their class during school hours. Nick News is currently showing new episodes once a month on Tuesday nights, only on Nickelodeon, at 8:00pm, with the 22-minute long episodes running commercial-free (commercial advertisements and promos for Nickelodeon programming fill the gap between the end of the program and the start of a Nick at Nite show). TeenNick aired two episodes of the show in reruns on both October 25, 2010 and February 15, 2011. The most recent episode, titled "Liar Liar Pants on Fire: Lies Parents Tell You", was about kids and celebrities discussing lies their parents have told them to get either get them to do something, or get them out of their hair. This episode aired October 22, 2013. Nick News is well known for many trademarks during its run on Nickelodeon, such as Ellerbee's signature tagline, "If you want to know, ask!"

After 25 years on the air, a hour-long finale titled Hello, I Must Be Going: 25 Years of Nick News with Linda Ellerbee aired on Nickelodeon on December 15, 2015. 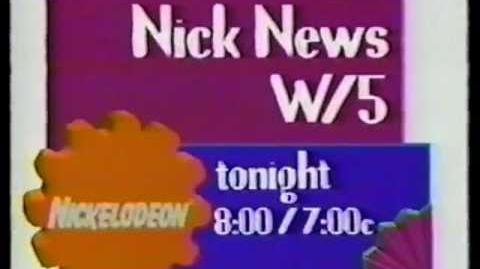 Retrieved from "https://nickelodeon.fandom.com/wiki/Nick_News?oldid=117108"
Community content is available under CC-BY-SA unless otherwise noted.