Nick Zone was a series of illustrated Nicktoon chapter storybooks, published by Scholastic between 2003 and 2005. These books were sold exclusively through the direct-to-home market. It was notable for containing the only storybook based exclusively on Danny Phantom, and also featured the first storybooks based on The Fairly OddParents.

The series' SpongeBob SquarePants books were re-released digitally through Amazon Kindle in 2011. It is unknown if any of the other books in the series will be re-released as well.

Pirates of the Kiddy Pool
March 2004

Once Upon a SpongeBob
April 2004 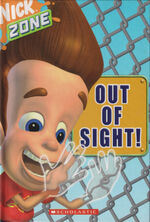