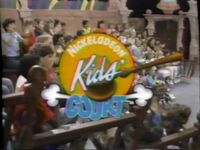 Kids Court is a children's television/nontraditional court show aired by Nickelodeon. First airing on September 10, 1988 and ending in 1989, it was hosted by actor Paul Provenza. It was created and executive produced by Alan Goodman, Albie Hecht, and Fred Seibert; produced by Chauncey Street Productions, a division of Fred/Alan, Inc., in New York.

It claimed to utilize grievances made by children mailed to the studio -- each side of a grievance would be represented by a child in the audience, and at the end of their argument, children in the audience would cheer. The "Judge-o-meter", a cardboard rendering of an English judge (with wig) with peak meters for "eyes", would measure the decibels of the screaming, cheering children, and the side that generated the most screaming and cheering would win the argument. The "Judge-o-meter" system would also be used to "sentence" the guilty party -- sentences would be suggested by children in the audience.

The show also had two courtroom sketch artists during the course of the show (1 appearing at a time), Nobi Nakanishi and Asha Canalos.

During commercial breaks, the show would have quick quiz questions for children, about the legal system. Kids Court was part of Nickelodeon's "Cable in the Classroom" promotion.

In 1991, Nickelodeon tried to revive Kids Court with Greg Lee as the host and taped at Nickelodeon Studios at Universal Studios in Orlando, Florida.

Retrieved from "https://nickelodeon.fandom.com/wiki/Nickelodeon%27s_Kids_Court?oldid=245648"
Community content is available under CC-BY-SA unless otherwise noted.