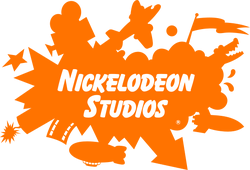 In November 1988, Nickelodeon joined the USF team to make its very first production studio. In spring 1989, they filmed its first show there, Super Sloppy Double Dare. The studio (along with the park) officially opened on June 7, 1990. The facility was a working studio where many Nickelodeon and Nickelodeon GAS shows were produced, with the first being Double Dare. It consisted of soundstages 18 and 19, along with a central building between them that housed both Nickelodeon production offices, dressing rooms, makeup rooms, the Gak Kitchen, and the Game Lab live show located on Stage 17 for guests of Universal Studios Florida. Soundstage 21, located directly behind Stages 17 and 18, was also part of the production facility in the early 1990s when a larger sound stage was needed for the taping of Nickelodeon/Global Guts. Stage 21 was not "owned" or part of the studio contract Nickelodeon had with Universal, but was leased separately for the time of their productions on it.

While Nick Studios was in production, there were many orange benches scattered around the facility, incorporating shapes like a human footprint, carrot, finger, cruise ship, wave, cloud, etc., reflecting the network's station IDs. Some of these benches would later be moved to the "Control Room" at Jimmy Neutron's Nicktoon Blast. Also scattered around the property were Nicktoons cutouts for photo opportunities. A gift shop was also located near the Slime Geyser, featuring then-popular Nickelodeon characters on the front of the building.

On April 30, 1992, a time capsule buried by the network in front of Soundstage 18. It contains items deemed important to the children of 1992 as voted upon by Nickelodeon viewers, including bubble gum, a skateboard, a comic book, a phone book, VHS tapes of Home Alone and Back to the Future, assorted photographs of bicycles, trains, cars, politicians, and celebrities, a piece of the Berlin Wall, the Orlando, Florida TV Guide from the week of April 30, 1992, a baseball, a Barbie Doll, a Nintendo Game Boy, a Nicktoons T-shirt, Michael Jackson CDs, Twinkies, an issue of Nickelodeon Magazine, Rollerblades, a can of Nickelodeon Gak, Reebok Pump sneakers, and a copy of the Book of Endangered Special.

By the summer of 2001, Nickelodeon Studios was down to a very small number of employees. The majority of Nickelodeon production had moved to the Nickelodeon On Sunset facility in Hollywood, California. Due to decrease in the size of audiences attending the live recordings of shows and waning interest in game shows and sitcoms, (which were the sole output of Nickelodeon Studios) more than half of business was being lost. On top of that, the facility had been experiencing a steady decline of visitors since around 2000, and had an even bigger decline after Hurricane Charley damaged it in 2004. It closed its doors permanently on April 30, 2005, after Nickelodeon had gradually moved its administration to the MTV Networks headquarters in Santa Monica, California, and One Astor Plaza in New York City and its live-action production arm to the Nickelodeon On Sunset. The final program taped there was Nickelodeon SPLAT! on August 17, 2004.

The Slime Truck and the Nick at Nite taxi were both removed in late 1998. The Slime Geyser in front of Soundstage 18 was removed in May 2005 and the trademark "Nickelodeon" sign above the facility was removed in January 2006. The time capsule was taken out in August 2007 and moved to the Holiday Inn Resort Orlando Suites - Waterpark after the studio closed; upon the hotel's closure and rebrand in 2016, it moved west to its current location in the new Nickelodeon Animation Studio in Burbank, California, where it is set to be opened on April 30, 2042 (exactly 50 years after being buried at Nickelodeon Studios).

At this time, Stage 19, as well as the second floor control room in the center building between it and 18, is home to FSN and Sun Sports Network. It is also being used as a storage area for Universal Orlando parade floats, and to train sporting events for My Family's Got GUTS, which was a short-lived revival of the classic Nickelodeon game show Guts. The green room had been used as a one for the show, and has remained exactly the same as it did when earlier Nickelodeon productions used it, albeit with new furniture. Much of the Nickelodeon signage is still visible in the second floor hallways including multiple Ren & Stimpy murals. Currently, the tube that runs above Soundstage 19 that was part of the tour, is now used for storage of several old props and A/V equipment, along with storage for the Blue Man Group. Additionally, the Gak Kitchen is used as the break room for the front of their house staff and the space that formerly housed the Game Lab is now a special event room for them and Universal Studios.

On November 9, 2006, Universal Orlando announced that Soundstage 18 would be redesigned to become a 1,000 seat permanent venue for the Blue Man Group. The new venue opened on June 1, 2007. During the construction phase of new theater, no cosmetic changes were made, with the exception of the addition of the new box office in the pavilion. The sound stage was painted black with three giant blue heads, the main building was painted white with black and blue trim, and the side of Stage 18 was painted black with blue, yellow, and red paint splats. The facility was renamed the Sharp Aquos Theatre. Additionally, the dressing room signs that were used during the time of Nickelodeon remain the same, as well as the "Production Crew Only" orange splat ones. Overall, areas not accessible to guests have remained the same as they were during the time of Nickelodeon, including the wall murals in the main hallway (a blurred picture of a Family Double Dare taping), 2nd floor tube (Blue's Clues), 2nd floor hallway by the elevator (SpongeBob SquarePants), 2nd floor hallway (original Nickelodeon Studios Mural), and the guest escalator, which is now closed off by storage and a temporary wall that makes a rehearsal area (The Wild Thornberrys).

The queue for Nickelodeon Studios is now used by Total Nonstop Action Wrestling for queuing up audiences for its production of TNA Impact! in Stage 21 prior to the opening of the Sharp Aquos Theatre. The gate beside the new venue is now a meeting point for non-park audience members to enter the Universal Studios production facilities. The gift shop for the Blue Man Group is the only part of Nick Studios left. It features memorabilia from there and the network.

Nickelodeon Studios featured a tour for visitors of the Universal Studios theme park. As they entered the building, they would go up an escalator to the second floor, where they would enter a Blue's Clues themed room. From there, they would enter the Soundstage 19 viewing tube, in which the tour guide would tell them about the production taking place on there. Then, they would enter the Control Room viewing area, which showed a video about Nickelodeon, and allowed them to see into there. From there, they entered the Soundstage 18 viewing tube, where they would again learn about the production going on below. They would then go down another escalator to the Game Lab, and bypass it to the hallway with the wardrobe, makeup, and Gak Kitchen departments, where they would get a hands on experience tasting Gak and slime, and trying on different items for a Nickelodeon production. Then, the tour would conclude in the Game Lab, where lucky guests would have the chance to participate in testing possible games for upcoming Nickelodeon shows, and even have the chance to get slimed. The entire experience lasted around 40 minutes. It operated from June 7, 1990 until June 15, 2001, when staffing cuts were made at the studio. The Game Lab itself continued to operate until the closing on April 30, 2005. 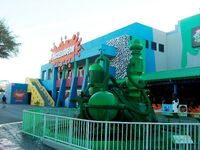 Side view of the Nickelodeon Studios exterior. 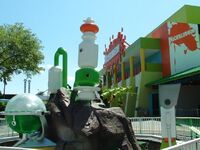 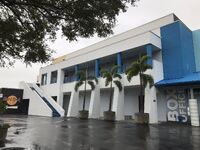 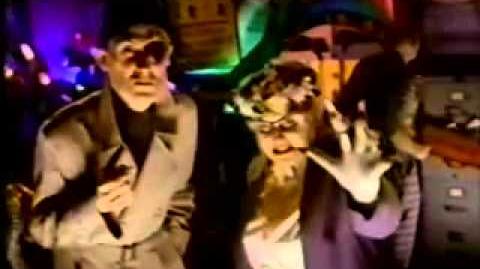 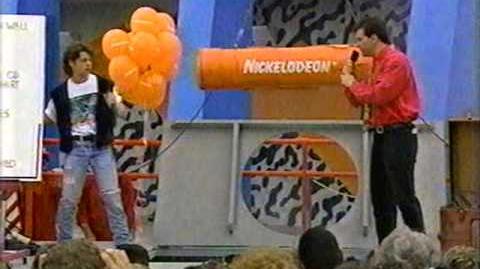