The content below is from Abner on this wiki. This is the page of Abner, a minor character from Hey Arnold!. Articles will be formatted similarly, and will appear as such.

Abner is Arnold's pet pig. He was a gift from the Green-eyed People at Miles and Stella's wedding from a water basket. Phil first thought to cook Abner but Stella decided to keep the pig. Abner was mistaken for a girl by Stella, who wanted to name "her" Abigail.

Stella first mistook Abner for a sow (a female pig) and wanted to name him "Isabelle" until she learned that he was a boar (a male pig). Abner's best talent is digging out truffles. Abner is usually voiced by Craig Bartlett. Most likely, Abner was born in San Lorenzo, and is older than Arnold, as potbellied pigs can live up to 15-20 years.

He is shown to be like Arnold's best friend (next to Gerald, of course). Arnold has been shown to be completely devastated when Abner is in any danger; such as going missing ("Abner Come Home"), and even more so when he is captured and nearly barbequed ("The Pig War").

Abner's doppelganger from the episode "Arnold Visits Arnie" is Abigail.

He has gotten fatter as of Hey Arnold! The Jungle Movie, where he plays a major role: stowing away in the plane to San Lorenzo, sensing the threat of "Eduardo", and getting all the way back to Hillwoodthrough ridiculous circumstances to warn Phil and Gertie of what's happened. 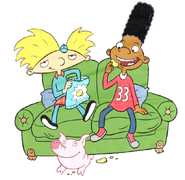 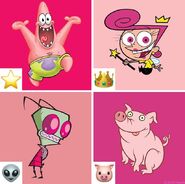 Retrieved from "https://nickelodeon.fandom.com/wiki/Nickipedia:Wikia_tour/Abner?oldid=232112"
Community content is available under CC-BY-SA unless otherwise noted.