The content below is from Dora Márquez on this wiki. This is the page of Dora Márquez, the main character from Dora the Explore. Articles will be formatted similarly, and will appear as such.

Dora Márquez
Dora the Explorer and Dora and Friends: Into the City! character

Adventuring, finding her way, hanging out with her friends and her family, speaking in different languages, ice cream, the beach, talking to the viewers

Getting swiped by Swiper

Dora Explorer Márquez is the main character and hostess of the Dora the Explorer and Dora and Friends: Into the City! television series. She is a heroic Latina girl who embarks on a trip in every episode in order to find something or help somebody in need.

Dora has relationships with all of the characters she meets, failing even to hold a grudge against the sneaky fox, Swiper. She hates villains only when it seems that compromise is impossible, and even in these cases, fails to display actual anger. She gives others a chance to try their hands at tasks even when she herself might have an easier time with them. Dora values her family, whom she loves openly, though she spends little time indoors at home with them. She tries to introduce her traditions and customs, subtly and without compulsion, to those who are not familiar with them. Dora is fond of Boots, who became her best friend when she saved his beloved red boots from being swiped by Swiper.

Dora has dark peach skin causing it to appear almost orange. She has short brown hair as well as brown eyes. The character is often shown wearing a pink t-shirt, orange shorts, frilly yellow socks, and white Velcro shoes with a pink trim along with other outfits. She wears a yellow bracelet with a blue flower on it that she wears on her right wrist and it happened to be a birthday present when she was four. Additionally, though rarely seen, Dora has ears with little gold earrings. Otherwise, if you see a Dora the Explorer kaleidoscope promo airing on Nick Jr, you see a partial portion of Dora's orange shorts as part of a picture of Dora going up, twirls around, and drops down under a video clip of Dora holding still in a kaleidoscope-styled nature.

She is indicated to be 7 years of age until the Season 5 episode Dora's Big Birthday Adventure, in which she turns 8. In Dora and Friends: Into the City!, Dora is now 10 as a few years have passed. During Dora and the Lost City of Gold, she is 6 in the beginning and after the time skip, she is 16.

Dora enjoys sports. She played on a baseball team with Boots and her other partners and was coached by her father (who has never been depicted as having other employment before or since). She loves and excels at soccer. Dora is also a musician, skilled at playing a wooden flute and the guitar. 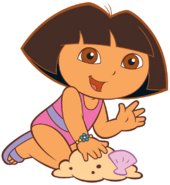 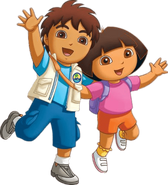 Retrieved from "https://nickelodeon.fandom.com/wiki/Nickipedia:Wikia_tour/Dora_M%C3%A1rquez?oldid=203770"
Community content is available under CC-BY-SA unless otherwise noted.