The content below is from Principal Wartz on this wiki. This is the page of Principal Wartz, a minor character from Hey Arnold!. Articles will be formatted similarly, and will appear as such.

Principal Wartz is a fictional character in the Hey Arnold! TV Series.

Due to the fact that he's a principal. Principal Wartz manages to take matters into his own hands. He's very strict, disciplinary, and can sometimes be grouchy. Though he does have a soft spot at times. His very strict personality is what makes him a good principal.

He's bald but has a little bit of gray hair on the sides of his head. He has bushy gray eyebrows and wears a short sleeved white shirt with a red necktie, blue pants and brown shoes.

Wartz is the principal of P.S. 118. He is a strict, yet often well-intentioned, principal.

While often characterized as bumbling and barely-competent, or at other times childlike but benevolent, Principal Wartz has also been shown to have certain paranoid tendencies, often believing his students are out to get him in some way, or himself plotting to spy on or otherwise entrap them in wrongdoing. He is very harsh in his punishments of schoolyard wrongdoers. Although he seems to have softened up a bit, after he got into trouble for being to harsh with students (which caused him to temporarily quit). 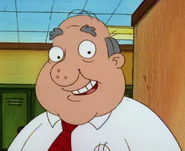 Retrieved from "https://nickelodeon.fandom.com/wiki/Nickipedia:Wikia_tour/Principal_Wartz?oldid=232111"
Community content is available under CC-BY-SA unless otherwise noted.