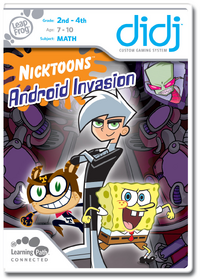 Nicktoons: Android Invasion is a 2008 platformer game released for the Didj on June 29, 2008, a portable game system made to help kids learn through games. In the game, the player can play as SpongeBob SquarePants, Danny Phantom, or Manny Rivera. The plot is to stop Zim from taking over the world while fighting android clones of the player character's friends. It takes place inside Zim's base. At random points in the game there will be blockades that can be removed by solving math problems. When playing as SpongeBob, in one level GIR will leave hidden piggies around the base. Much like Nicktoons: Freeze Frame Frenzy, Zim is the antagonist in this game.

Retrieved from "https://nickelodeon.fandom.com/wiki/Nicktoons:_Android_Invasion?oldid=243069"
Community content is available under CC-BY-SA unless otherwise noted.