This article is about the TV channel. For the series of shows, see Nicktoons.

1080i HDTV
(downscaled to letterboxed 480i for the SDTV feed)

NickToons (formerly Nicktoons TV and Nicktoons Network) is an American digital cable and satellite television network owned by Nickelodeon Channels Group, a unit of Paramount Media Networks division of Paramount Global. It is a sister service of the Nickelodeon cable channel. The network broadcasts Nickelodeon's cartoon series (known collectively as Nicktoons), along with other original cartoon series and foreign animation, along with occasionally live action programs for some reason, from other Nickelodeon networks overseas 24 hours a day. 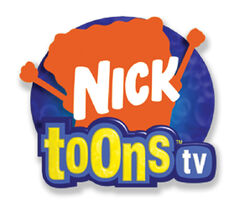 The channel was launched as Nicktoons TV on May 1, 2002 at Midnight (technically, it started on April 30, 2002 on Eastern at 9 p.m.), at first only available on digital cable until early 2003, when it began its broadcast on satellite television as well. In February 2005, Nickelodeon announced that the channel would become ad-supported.

On April 7, 2003, the channel was renamed NickToons. In addition, bumpers featured real-life and or 3D clips with images of the Nicktoon characters (such as a red, robotic microscope in the blue background and a X-ray shows the objects of the characters inside their bodies). Some bumpers were made by KaChew!, a Klasky Csupo subsidiary. In March 2004, the network's logo was slightly updated (a white splat with the blue words of the network's name, which representing a spit or a liquid water) in the new bumpers and a screen bug. However, the 2003 bumpers would remain in use until 2005.

On September 23, 2005, the channel was rebranded again as Nicktoons Network, introducing a new logo of a globe with the familiar Nickelodeon "Splat", and adapted a Hollywood-esque theme and the new slogan "Animation Capital of the World". On February 25, 2006, the Nicktoons Network introduced their first original series, Kappa Mikey, which lasted for 52 episodes.

In 2007, the Nicktoons Network changed its website again, this time with a monster-themed webpage filled with commercials and ads.

On September 28, 2009, the Nicktoons Network got a new logo (as did all the Nick channels on that day), with its name being shortened back to NickToons.

An HD feed was launched on August 13, 2013, and is available on several providers at midnight. Like all Nickelodeon channels, 4:3-sourced content is presented in pillarboxed fullscreen on the high definition feed. The network's SD content airs with pillarboxing on the high definition channel, and since 2017, the high definition feed is downscaled by the provider for the standard definition feed, resulting in all 16:9 programming appearing in a 16:9 ratio. In May 2014, NickToons revamped their whole on-air look, with new idents and the new slogan "Action to the Maxtion". They also got new HD bumpers and a new rating bug designed for HD.

NickToons' programming consists entirely of animated television programs formerly or currently broadcasted on its parent network. As has been the pattern with many children's networks over the years, as they made forays into original programming and build up an archive of their newer series, older Nicktoons programs, along with those which had low sustaining popularity, have moved off the network's schedule (though some of these would later reappear on The '90s Are All That, NickSplat and NickRewind on TeenNick). Advertising was also added after the 2005 rebrand.

For a Halloween-themed week in October 2008, the network aired Are You Afraid of the Dark? on October 20, making it the first live-action show to air on the network. On October 29, some original shows aired between 11:30-1:00.

Since 2006, NickToons has premiered episodes of shows that originated on the main Nickelodeon network, but due to declining or poor ratings, were moved to airing exclusively on NickToons. These have included Mr. Meaty, El Tigre: The Adventures of Manny Rivera, Planet Sheen, The Legend of Korra (though the episodes that premiered on NickToons were initially released online), Robot and Monster, Rabbids Invasion (though the show was moved to Netflix for its fourth and final season), Bunsen Is a Beast, Welcome to the Wayne, Rise of the Teenage Mutant Ninja Turtles, Ollie's Pack, and It's Pony, as well as the final seasons of The Angry Beavers, Oh Yeah! Cartoons, CatDog (the final episode only), As Told by Ginger, Invader Zim (though the episodes that premiered on NickToons were first released on DVD two years earlier), My Life as a Teenage Robot, Back at the Barnyard, The Mighty B!, The Penguins of Madagascar, The Troop, Fanboy and Chum Chum (the final episode only), T.U.F.F. Puppy, Kung Fu Panda: Legends of Awesomeness, Breadwinners, Max & Shred, Harvey Beaks, Pig Goat Banana Cricket, Teenage Mutant Ninja Turtles, and The Fairly OddParents.

On May 9, 2015, NickToons removed many familiar cartoons from their schedule, replacing them with reruns of live-action shows like Henry Danger and The Haunted Hathaways, as well as more Voltron Force and Teenage Mutant Ninja Turtles, to the dismay of the older shows' fans.