Olga Pataki is Helga's overachieving, sweet, but ditzy and childish older sister on Hey Arnold! She attends the fictional Wellington College, though in one episode, Helga says that Olga attends Bennington College, which is an existing college located in Vermont. Olga clearly suffers from perfectionism. She possesses skills that demonstrate a high-level of intelligence such as in the episode "Helga on the Couch", where she was shown to be a virtuoso pianist in one of Helga's flashbacks, and when Helga mentioned that she was a straight A student. She attended P.S. 118 as a child, and is praised by Helga's current teachers for her achievement.

Bob and Miriam consider Olga to be perfect, which bothers Helga. There are also times when her parents will confuse Helga for Olga. Fortunately, Olga does give Helga more attention than their parents much of the time and has good intentions, usually by wanting to hang out with her or kissing her on the lips. However, Helga does not receive Olga's attention or intentions very well and often tries to push Olga away and keep her distance. Olga has a tendency to view life through rose colored glasses and appears not to notice Helga's avoidance tactics. Therefore, either Olga likes to avoid conflict since she rarely acknowledges her family's problems, is oblivious, or is in denial (though the latter is more likely).

It is revealed in "Helga on the Couch" that Olga has reacted to her family's problems through the years by being a perfectionist and keeping quiet about the situations at hand. She later reveals to Helga that she is envious of her, as unlike Olga, their parents never heaped unrealistic expectations onto her, comparing herself to a "wind-up toy" that performs for their parents. 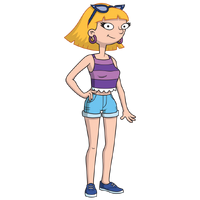 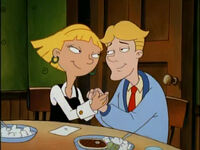 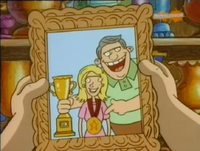