"You keep the money."
"Make me a sandwich."
Oskar Kokoshka is one of the boarders living at the Sunset Arms Boarding House on Hey Arnold!

Oskar is a semi-overweight man. He has a copper beard and balding hair combed to the side. He speaks with an unidentified Eastern European accent. Oskar is of Czech heritage, confirmed in ("Baby Oskar") when an elderly lady went to the hospital after Oskar shoved her to the ground and stole her taxi. He always wears a black suit with a white undershirt.

Oskar's personality can be best described in five words: He is lazy bum who looks out for himself. He almost always puts his friends and his wife, Suzie, in second place, going as far as saying "What's wrong with second place? That's pretty good!" ("Arnold as Cupid"). Oskar seems to have a gambling problem, as Suzie mentions that he has placed bets at the racetrack multiple times. His gambling problem has on at least one occasion caused him to be threatened with violence by an extremely large man, who was seeking the money that Oskar had owed him ("Oskar Gets a Job"). He is something of a con artist, looking for every possible opportunity to gain a pretty penny. He has even gambled in a poker game and lost Arnold's CD player. In "Summer Love", Oskar buys a magnetic metal detector and goes around the beach stealing people's valuables. He is eventually caught. In "Oskar Gets a Job", he attempts to steal the coins out of the boarding house washing machine. Oskar is always trying to take the easy way out of everything: In "School Play," he had Suzie write out little cheat sheet papers for Arnold to read off of during the play. Oskar is also lazy, as evidenced in "Oskar Can't Read?" Oskar's excuse for not finishing his reading work given to him by Arnold was that he had it all done, but Suzie turned a fan on and it all blew out the window. Oskar is unemployed until the episode "Oskar Gets a Job."

Despite these negative traits, Oskar does have a caring heart, loves his wife dearly, and comes to think of others before himself at times. At the end of "Arnold as Cupid", Oskar risked successfully getting back Arnold's CD player, declined the money Suzie was going to give him, and was willing to get a job himself. Another example of his unselfish behavior was shown in "Baby Oskar" when he started to bond well with his baby cousin-in-law also named Oskar. In "Casa Paradiso", he along with many of the Boarders were willing to help Arnold get Phil to change his mind on selling the boarding house and moving to Florida.

Suzie is Oskar's hardworking wife and his source of income. She is obviously the bread winner in the marriage. Oskar and Suzie constantly clash because Suzie is angered that Oskar is unemployed and spends all of their money at the race track betting on race horses. It is not an uncommon scene in the boarding house to see plates being thrown at Oskar from his apartment. At one point, Suzie threw Oskar out of their apartment and Arnold allowed Oskar to stay in his room. After while, Arnold realized how much of a moocher Oskar was and decided to work to get the couple back together. Oskar has shown to love his wife dearly in that same episode.

Nancy is Suzie's cousin. She only appears in one episode (Baby Oskar). It is hinted that she doesn't like Oskar at all because she says she named her son Oskar before she knew of Suzie's Oskar. When Nancy leaves baby Oskar with Oskar and Suzie, Oskar at first does not care for the baby, but Arnold steps in and teaches him how to care for a baby. Later in the episode, the baby gets the hiccups, but Oskar mistakes it as a serious illness. Oskar, in one of the few instances shown where he cares about someone other than himself, rushes the baby to the hospital. At the end of the episode, the baby doesn't want to leave Oskar.

Oskar is most likely the boarder that Phil does not get along with the most. In a lot of episodes, Oskar tries to take Grandpa's food. In "The Flood", Oskar attempts to leave Phil behind in the green house by stealing the raft, only to fail because the raft cannot fit through the door. In "Rhonda Goes Broke", Phil is showing Rhonda's family their room and makes the pull out bed come down. When the bed comes down, it is revealed that Oskar was sleeping in it with a half eaten salami (which was supposed to be the next night's dinner) and Phil becomes very angry.

Arnold knows that Oskar is a self-centered con-artist, but because of his good nature, Arnold is always willing to help him in times of crisis. Arnold helps rekindle Oskar and Suzie's relationship in "Arnold as Cupid". Arnold also helps Oskar learn how to read in "Oskar Can't Read?" . He also helps Oskar get a job as a newspaper delivery person. However, it is shown that even Arnold cannot put up with Oskar's personality traits for quite long after Oskar moves into his room after a fight with Suzie, where he subsequently made himself at home, stole Arnold's bed, shut off Arnold's alarm the next morning making him late for school, played his saxophone loudly while Arnold was trying to study, and ultimately invited his friends over to a poker game in Arnold's room where he, after running out of cash to bet, put up Arnold's CD player believing he could win with a pair of 3's.

Lana like all the other borders hates Oskar and would not lift a finger to help him. She is seen fighting against Oskar in "Gerald Comes Over."

Ernie doesn't get along with Oskar as seen in "Arnold as Cupid" When Oskar asks if he can stay with him Ernie tells him "As soon as you pay me the 20 bucks you've owed me since Wednesday!" Also in "Arnold's Christmas" Ernie gives Oskar a bag of coal for Christmas. Plus in "Oskar Gets a Job" and "Oskar Can't Read?" Ernie calls Oskar a loser.

Oskar is extremely jealous of Mr. Smith because he has a shower in his room.

Mr. Hyunh thinks Oskar is a bad person and calls him that in quite a few episodes.

It is first revealed in the episode "Oskar Can't Read?" that Oskar was illiterate. This could be the reason why Oskar has a hard time finding a job. Arnold was the first to discover that Oskar couldn't read and volunteered to help him. Soon after the other borders found out. Ernie then placed a bet that Oskar couldn't learn to read by the end of the month. Of course, money is Oskar's most important consideration. Oskar gives Chocolate Boy chocolate in exchange that Chocolate Boy read him the first page of "A Tale of Two Cities" by Charles Dickens in order for him to memorize it and cheat. His plan works at first, but Ernie switches the books and uncovers Oskar. Arnold is disappointed. Oskar finally decides that he wants to read and Arnold tutors him. Oskar's final test is to navigate home using directions given to him by Arnold, from an unknown part of town. After hours of waiting, Oskar finally makes it home, proving that he can read. Arnold's teaching paid off because in the episode "Summer Love," Oskar reads a store sign without any trouble.

In "Oskar Gets a Job," Oskar finally gets a job as a paper boy, after failing to get a series of other jobs. Of course, his first question to his employer is "How many sick days do I get?" Oskar, when he realized he had to get up at 4 o' clock in the morning, all of the sudden was not up for doing the job. Arnold wakes up at four to find Oskar's papers sitting on the step. He wakes Oskar up, but Oskar tells him he can't work because he is sick with the stomach flu. He asks Arnold to fill in for him, Arnold obliges and takes Oskar's paper route. When Arnold comes home from the route, Oskar is eating breakfast, which leads Arnold to believe he was not sick, but just using him. The next morning, Oskar does the same thing, but this time complaining about his back, Arnold gets stuck delivering his papers again. Arnold comes home and catches Oskar dancing, which means he didn't throw his back out. Arnold is convinced that Oskar is pulling his leg and being lazy. Arnold eventually has a talk with him, leading up to Arnold calling Oskar a "huge loser". Oskar hears all of the boarders including Suzie talk about him negatively and vows to change. Oskar gets up the next morning and actually does his job and proves the boarders wrong.

His occupation as a paper boy is reaffirmed in "Oskar Can't Read?".

It is unclear what country Oskar has immigrated from, but it can be assumed to be an eastern European country. In the episode "Baby Oskar", a woman calls him Czechoslovakian. However, Czechoslovakia broke up in 1993 into Czech Republic and Slovakia. This makes it even more confusing to pinpoint exactly where he is from. The artist he's named after was an Austrian of Czech descent.

In a 1998 interview, Craig Bartlett confirmed that Oskar was indeed from Czechoslovakia (Bartlett Interview, 1998).

Additionally, his accent is based on that of Gabor Csupo, the Hungarian co-founder of Klasky Csupo. 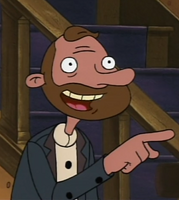 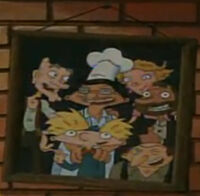 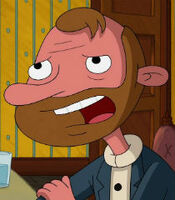 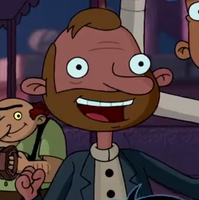