Otis
Back at the Barnyard character

"I am the greatest"

Despite being a male, he has udders like cows do. The reason he was given udders was because the creators figured this is how city folk thought all bovine looked like.

When Otis was little, he was separated from his birth mother at a county fair and then was adopted by Ben, who took him in and became the leader of the barnyard. While Otis and Ben were total opposites, they still cared for each other deeply and had a great relationship. Devastated and depressed, Otis blames himself for his father's death since he wasn't there for him (which even Dag harangues him for). In the end, Otis is elected the new leader of the Barnyard and defeats Dag and the coyotes with the help from his friends.

Otis is an intelligent, fun-loving, friendly, energetic, happy-go-lucky, goofy, carefree, kindhearted, brave, determined, adventurous cow who knows how to work guitars, cell phones, and microphones. Instead of having strict, serious rules, he would rather have fun with his best friends and mess around all he wants and not take responsibilities.

Otis is glad to face his fears to save himself and his best friends; however, when it comes to money, Otis is usually selfish, greedy, and stubborn and stingily keeps it all to himself. Despite this, he is genuinely a nice, caring cow with a bovine heart of gold. 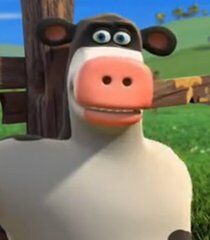 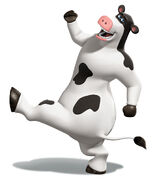 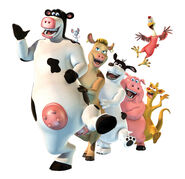 Add a photo to this gallery
Retrieved from "https://nickelodeon.fandom.com/wiki/Otis?oldid=260142"
Community content is available under CC-BY-SA unless otherwise noted.