PAW Patrol: The Movie is an animated movie based on the Nick Jr. animated series PAW Patrol. Directed by Cal Brunker, the movie was released in theaters and on Paramount+ on August 20, 2021.

When the PAW Patrol's biggest rival, Humdinger, becomes mayor of nearby Adventure City and starts wreaking havoc, Ryder and everyone's favorite heroic pups kick into high gear to face the challenge head on. While one pup must face his past in Adventure City, the team finds help from a new ally, the savvy dachshund Liberty. Together, armed with exciting new gadgets and gear, the PAW Patrol fights to save the citizens of Adventure City and stop Humdinger from destroying the bustling metropolis.

In Adventure Bay, a truck driver named Gus crashes and hangs over the town's suspension bridge when he sees baby turtle on the road. Cap'n Turbot comes across the scene and calls Ryder, who sends the PAW Patrol pups into action. Chase, the police pup, saves the truck driver and the mission ends with helping the baby turtle cross to the other side of the road.

Meanwhile, in nearby Adventure City, the PAW Patrol's enemy, Mayor Humdinger, had recently been elected mayor. Knowing of Humdinger's infamous wrongdoings in Foggy Bottom, a stray dachshund pup named Liberty calls the team. Chase says he is not going due to him having a "history" in the city when he was a little puppy, but Ryder convinces him to go back while Chase reluctantly gives him his trust. The team takes a road trip arrives and gets settled into their new headquarters the Pups are in awe seeing the place and gear. Ryder told them that they can build it thanks to in-universe franchise. Meanwhile, Humdinger uses a device called a Cloud Catcher to clear up the weather so he can do his firework show later today tonight. The show goes haywire and the team is alerted. They rush straight into a traffic jam, but Liberty arrives and guides them to the City Hall. They manage to take care of the situation but Chase fails to save some people. Ryder and Chase have a pep talk alone at a park. Meanwhile, An infuriated Humdinger watch the news about the PAW Patrol tells his henchmen Butch and Ruben to try to get rid of the PAW Patrol by what any means necessary.

The next day, Humdinger builds an extension to the subway train track line with several inversions similar to a roller coaster loop-de-loop. It breaks and traps the passengers upside-down. The pups rescue them but Chase freezes when his fear gets the best of him and is forced to be rescued by Skye. Marshall takes over the rescue by going to the parking garage and use his ladder to reach the train. After the rescue and Chase gets down in the ground, Ryder suggests Chase should take a break from his duties, but this greatly upsets him and causes him to run away after accusing Ryder of breaking his trust and giving up on him when things get difficult. Chase drops his collar and outfit in the process and is unexpectedly soon captured by Humdinger's henchmen. The team discovers that a lot of dogs have gone missing and Ryder links them to Humdinger. Liberty gets captured on purpose and is taken to an dog obedience school-turned-dog jail prison building where she meets snooty valley girl poodle Delores. Liberty encourage Chase and bring up his morale a bit. Chase asked Liberty on how to get out because the door is locked. Liberty only reveals that she's not alone. Rubble used his wrecking ball to breach the wall. Butch and Reuben noticed the commotion and the dogs the Humdinger capture chased the two guards and save the rest of the dogs. The PAW Patrol and Liberty heads away from the Dog Jail to the Adventure City HQ and Ryder and Chase splits up.

Ryder takes Chase to where he found him, at the City intersection and tells him why he chose him was because he was the bravest dog that he met. Chase's collar is returned to him and he declares that he is back on the case. Meanwhile, the Cloud Catcher has gone critical and the creator Kendra Wilson confronts Humdinger. He destroys the remote and Kendra tried to warn the people about the danger they are about to face but Mayor Humdinger shuts her off and reveals his building called Humdinger Heights. The machine unleashes a week's load of bad weather. Kendra calls the team and the pups deployed. Liberty is in awe. moments later, Liberty is given her own vehicle and uniform, minus her collar and pup-tag, temporarily joining the team. The team drives to Humdinger Heights and forcing them to improvise. Chase managed to save the civilians, Marshall, Rubble, and Rocky worked to keep the civilians inside the building, Zuma and Liberty goes to the canals to save a family and Skye flies to the air to stop the cloud catcher. Ryder takes the elevator to the top office. Ryder saves Humdinger. Humdinger tells him that this is an "assisted exit." The elevator's power is cut off by the storm and Ryder enters to the pulley area of the elevator Ryder, across many rescues He takes no pleasure of doing his rescue, by rapidly descending to the ground floor. Ryder jokes that it is satisfying to watch Humdinger falls. Mayor Humdinger screams as he reached the ground floor. Ryder resorts to rappel down the elevator shaft but the storm destroys the tower and he is trapped in the building when it falls down. Chase notices the scene drives up to save him using his motorcycle, Chase sees Ryder's light from the other side of the building. About to use his grapple, his pup pack malfunctions and he barked for it to be removed. Feeling like he can be brave and encouraged by Ryder's words, Chase takes a leap of faith and get to the other side, Chase sees Ryder pinned under the debris. Chase and Ryder worked together to get him free and after that they share a moment and later left the building. while Skye flies up and notices the cloud catcher. She fires her net but she is shocked forcing to fly up again. At the second time Skye's vehicle transforms into a jet to destroy the Cloud Catcher in a kamikaze style attack. She ejects from her plane before it crashes and flies back down to the city. After this, the skies are clear again and sunny. Skye then uses her jetpack to fly to safety. After that, Skye hopes that Ryder has an insurance for her copter, only to crash its remains to the ground, upsetting her as Rocky tells her that her copter will buffer out, only to stare at Rocky in annoyance.

Ryder and Chase gets out of the building and the pups are relieved to see them safe. Ryder is proud of his team, and the citizens emerged from the building congratulating for a job well done. However, Mayor Humdinger tries to escape; Chase catches him and puts him under arrest for the trouble he has caused to the city (gross negligence, public endangerment, and dognapping). The Mayor said the pups will never arrest him because he's a mayor. He tries to run away as fast as possible, but Skye uses her mini drone to stop him. And Mayor Humdinger is angry at the PAW Patrol for humiliating him five times in one day.

The team is given the key to Adventure City in a major ceremony by Kendra and Marty. Liberty becomes an official member with her very own collar and pup-tag, finally fulfilling her aspirations of doing so. Ryder begins to make a speech, but he is interrupted by a call from Harris, one of the dogs from the dog jail, saying there is trouble at the waterfront, leading the team to drive to the rescue while the theme song plays. Liberty now has her very own collar to go with her outfit as of now.

In the credits, Mayor Humdinger and the Catastrophe Crew are shown to have been apprehended and detained for their crimes throughout the film.

The film is animated by Mikros Animation at its Montreal division office, which was also involved in The SpongeBob Movie: Sponge on the Run.[1] The film's animation testing was first conducted in 2017, before being confirmed for development as of May 2019.[2] On February 21, 2020, it was confirmed for an August release with animation veteran Cal Brunker directing the film.[3] PAW Patrol: The Movie is the first film that's part of Spin Master's new feature film plans.[2]

Other characters from the series, like Francois Turbot and Katie, make non-speaking cameo appearances. 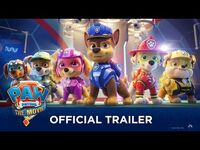