Jenna Marie Castle (as a baby)
Corrine Hoffman (as a toddler)

Mother: Mrs. Pepper
Father: Mr. Salt
Brother: Cinnamon
Paprika is one of the main characters on Blue's Clues and Blue's Clues & You!.

Paprika is Mr. Salt and Mrs. Pepper's daughter. In the first three seasons, she is a baby and only speaks in incomplete sentences. She has an orange gummy teddy bear and sleeps in a crib made from a peanut. In the fourth season, Paprika becomes a toddler and prepares to be a responsible sibling after the announcement of Mrs. Pepper's second child.

In the original series, Paprika's baby voice was provided by Jenna Marie Castle. Her voice as a toddler was provided by Corrine Hoffman. In the reboot series, she is voiced by Shechinah Mpumlwana. 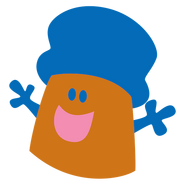 Paprika in the original show