Patchy wears an eyepatch and a hook on his right hand. Patchy also has a black beard, a skull-and-crossbones hat, and other pirate accessories. He wears one boot and a peg leg in his early appearances; in later episodes, he wears two boots.

Patchy and Potty's live-action segments typically appear at the beginning and end of the show, as well as immediately before or after commercial breaks. A logo sequence featuring Patchy appears at the start of several episodes of seasons 4 and 5, identifying the episode as "a SpongeBob SquarePants special."

Patchy was added to the show in the second season as a way to make more content for double-length episodes, something the first season did not have. When Nickelodeon ordered a Christmas special for the second season, Stephen Hillenburg and the show's crew thought about how to achieve a 22-minute running time. Hillenburg thought that a live-action host would be a good idea; he wanted Tom Kenny to play Patchy, so that the main character of both segments would be played by the same person.

Patchy was made as an homage to the hosts of children's shows on local-access television channels. Because locally-produced shows are known for low production values, a variety of in-jokes were created with Patchy to evoke a low-budget look: Patchy's patch switching eyes, his hook changing hands, and his lip-syncing being poor.

When the crew had to decide on Patchy's house and hometown, they tried to think of a place where it "looked like a pirate would never live."[1] They chose a stock photo of a quaint, single-story home in Encino, feeling that it would create a funny contrast from the viewers' expectations of a pirate's home.

Patchy's original design included a peg leg. To create the illusion of only having half a leg, Tom Kenny wore baggy pants and bent his knee to wear the peg leg. It became too difficult for him to walk in the peg leg after a while, so Patchy started wearing two boots all the time. Patchy's hook was originally made out of cardboard spray-painted silver. When it got wet during the production of "Feral Friends," a new hook had to be made. 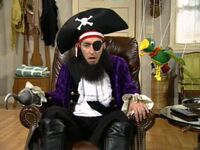