The Touchstone of Ra

Sibuna
Patricia Williamson is one of the major characters of House of Anubis. She is best friends with Joy Mercer, but also pretty close to all of her housemates. At first, she hates Nina Martin, the new American who joins Anubis House in Season 1, because she believes that Nina made Joy "disappear", but soon enough Patricia accepts that Nina had nothing to do with the disappearance, apologizes, and the two become fast friends. Patricia soon joins Sibuna, the group created by Amber Millington, which only had 3 members: Fabian, who Patricia is also very good friends with, Nina and Amber. Patricia shares a passionate kiss with Eddie in House of Silence / House of Warnings, but Joy interrupts them in the middle of it. Patricia was dating Eddie Miller, until the middle of the summer and mentioned in House of Arrivals / House of Presents, the first two episodes of Season 3, that they broke up. In House of Possession / House of Greed, Patricia admitted to KT that she still likes Eddie. Patricia and Eddie get back together in House of Deceptions / House of Rainbows. Patricia was the sinner of wrath/spite. In The Touchstone of Ra, she immediately became enemies with Sophia after she saw Eddie catching Sophia when she slipped. She also gave Dexter Lloyd a chance because she hated Sophia, but Eddie and the rest of Sibuna, She wouldn't due to them thinking that Dexter put the touchstone in Eddie's bag at the museum.

Patricia is one of the residents of Anubis House. She was best friends with Joy Mercer, but Joy suddenly disappeared as soon as Nina Martin arrived at the school. Patricia is very cold and hostile to Nina at the beginning of the show because she thinks that Nina had something to do with Joy's disappearance. Patricia also gets very mad at Fabian and most of her other friends for leaving her and becoming friends with Nina, although Fabian tells her that her bad attitude is the reason he and the others did so. Patricia originally was roommates with Joy, then Nina after Joy disappeared, but now she is currently rooming with Mara. Patricia is also currently part of Sibuna.

At the beginning of the series, she and Nina were enemies as Patricia constantly put her down, however, they developed into a friendship. Patricia was determined to find out what happened to Joy, because she was the only one who noticed that Joy was erased from the school photo after she disappeared. She also thinks that she is going crazy after a number of weird things happen to her such as weird dreams, visions of "ghosts," and even strange messages from Joy. Patricia was the only one who saw a strange man outside of the window during drama class and saw him later in the woods, convincing her that he was real and not a ghost, as she originally thought. After she saw the man, she told Mr. Winkler, a new teacher, everything that happened with Joy. After gathering evidence, the history/drama teacher Jason Winkler believes her and confronts the school administration and Victor. Afterwards, he avoids Patricia, because he got to close in find the truth about Joy's disappearance. He then later joins the Secret Society.

In Season 3, we find out she is one of the Descendents as her Great Grandmother worked with Robert Frobisher-Smythe when he was cursed by Anubis. She was needed in the ceremony so Robert would awaken. She became a sinner and started to work for Robert Frobisher-Smythe. She lured KT Rush into the gatehouse and tricked her into thinking Alfie Lewis was a sinner. When she went to warn her friends, Patricia stopped her saying that being evil was better than being good and being a great friend, while her eyes glowed red, intimidating KT.

Patricia carried on being like this and tricking everyone until she became herself again in House of Ammut / House of Heroes.

Appearance wise, Patricia is what many people would call an attractive girl. She has noticeable pale skin; long auburn hair, green-blue eyes and really marked cheekbones. We also should mention that she changes her looks frequently. She dyed her hair 3 times on the show, and she also started to wear it in a "girlier" way, as seasons passed.

Personality wise, Patricia is pretty complex. At first sight, she tends to appear as sarcastic, intimidating, bitter and tough, mostly in a "mess with me and you're dead" way. But when it comes to her friends, she's just scared of losing them, really protective and extremely loyal. It is proven that she can do some really bad moves with a good purpose, a clear example of that is when Patricia ostracizes Nina in order to know about Joy's disappearance. Thing is, Patricia would have done all of those bad things to anyone who tried to do something bad to her friend (s).

She is also very jealous, and leaves that pretty clear when someone, somehow stands between her and her friends, or boyfriend (Eddie). 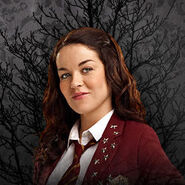