She is a 6th grader and the female counterpart to Harold. It is hinted that he may have a crush on her. She is often referred to as 'Big Patty' by other students, but she does not like this nickname at all and is very self-conscious about her size. She once stated how it hurts when others speak nasty things about her behind her back. Although she has a gruff exterior, she is actually a very patient and polite young lady. Because she is very big and tough looking, Patty became a bully to live up to the reputation given to her by other students that judge her based on her appearance and antagonistic towards Helga and other girls. Most of her "business" is done in a broom closet (she did beat up Helga twice in "Ms. Perfect"), although she has been known to dish out beatings outside after school. Patty is the city arm wrestling champion (at the end of "Harold vs. Patty").

Her parents are very supportive of her, and both of them possess the medical condition of dwarfism, which Patty obviously did not inherit as she is literally more than twice the size of both of her parents despite still being a child. Though she loves her parents dearly, her parents condition seems to have had a negative effect on her self image. Although Patty has been shown to be just as kind hearted and nurturing as her parents, she is not able to see these similarities because of their obvious differences in her appearance.

It's possible that Patty may have been adopted. Though it is not uncommon for children of little people to be born average sized, childbirth can be risky for the women with dwarfism especially for someone as small as Patty's mother. Though, once again, it is not impossible. The smallest mother on record is 2ft 4in. 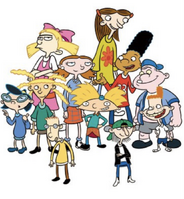 Retrieved from "https://nickelodeon.fandom.com/wiki/Patty_Smith?oldid=260713"
Community content is available under CC-BY-SA unless otherwise noted.