Oh my, This is Terribly Terribly encourageing

Peapod (as he's referred to by Arnold) first appeared in the episode Downtown as Fruits in a peapod costume in Helga's food group play. Because he wasn't given a real name, he was just credited as "Peapod Kid." He is referred to as Peapod Kid by his classmates, as well.

It's assumed that Peapod's family is about as well-off as Rhonda's. They go to the same country club, and Rhonda frequently asks for his opinions while she is bragging to the other kids about what is currently expensive and popular. For example, Rhonda tells the other kids that Aspen is a very popular city and very exclusive, and then she asks Peapod Kid about it, who replies, "Oh yes. Aspen is very, very exclusive."

He also has a deep voice and a wide vocabulary, usually starting his opinions off with, "Oh, my, that is terribly, terribly..."

In "Married", he's far from disappointed when Rhonda predicts he'll be married to Nadine some day, suggesting that he might

Also in the jungle movie he is seen in the background at the starting where he is talking to Chloe but it is unknown if he has a crush on her.

Peapod mentioned his father once in the episode Rhonda Goes Broke, saying that his father was going to buy Rhonda's house and turn it into low-income condominium units. 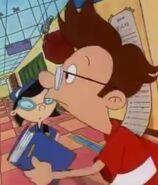 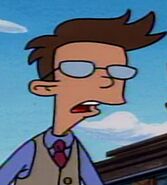 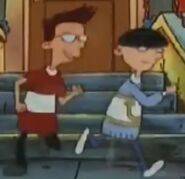 Retrieved from "https://nickelodeon.fandom.com/wiki/Peapod_Kid?oldid=261625"
Community content is available under CC-BY-SA unless otherwise noted.