Nickelodeon
Register
Don't have an account?
Sign In
Advertisement
in: Stubs, Shows, films, and people with wikis, Pelswick,
and 7 more

October 5, 2000 – November 15, 2002
Pelswick is a Canadian-Taiwanese animated series produced by Nelvana Enterprises and Suzhou Hong Ying Animation. It was based on the books of John Callahan. The show follows the daily life of a fearlessly funny 13-year-old boy, who happens to be in a wheelchair. Despite being a paraplegic, Pelswick demands to be treated like everyone else. 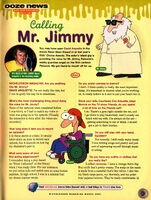 The topic of this page has a wiki of its own: Pelswick Wiki.