Pinwheel was Nickelodeon's first series. It was a puppet-driven program that was aimed at preschoolers aged 2-5.[1] Each episode is divided into short, self-contained segments, which included songs, skits, and animations. The show's setting is a boarding house called Pinwheel House, which is powered by a spinning pinwheel on the roof.

The show premiered on December 1, 1977, on QUBE's local C-3 channel in Columbus, Ohio. On April 1, 1979, the C-3 channel was expanded into a national network called Nickelodeon, and Pinwheel was broadcast to a wider audience. New episodes of the series continued until 1984, and it was reran until 1990.

Pinwheel takes place in and around a boarding house called Pinwheel House, which is powered by a pinwheel on the roof. Most of the songs on Pinwheel are set to music in the style of a wind-up music box. The show features live actors interacting with puppets, as well as animated shorts imported from Europe and Canada. According to the show's developers, its format was "geared to the interests and short attention span of preschoolers," which is why each episode is made up of many short stand-alone segments.

For its first season, Pinwheel was shown on Channel C-3 of QUBE, an experimental cable system in Columbus, Ohio. The show's early history was dominated by a musician named George James, who played the lead character Jake and was in charge of writing, performing, and producing most songs. The show was developed by former employees of the Children's Television Workshop, who formulated the episode structure for preschoolers.

Channel C-3 moved to national television in April 1979, when the channel rebranded as Nickelodeon. Production on Pinwheel moved from Columbus to New York. The revamped Pinwheel had a higher budget and started to include animated shorts that were imported from Europe and Canada. Production continued until 1984,[2] with the last project being a live touring show.

On January 4, 1988, Nickelodeon launched the Nick Jr. block, a weekday morning block for preschoolers. Pinwheel was the first show to air as part of the block. New bumpers for Pinwheel were made on the block, usually where the Nick Jr. logo took the shape of two pinwheels. The show continued to air in reruns as a staple of Nick Jr. until July 6, 1990. Another puppet series for preschoolers, Eureeka's Castle, would fill the timeslots where Pinwheel was. In this article, the Los Angeles Times described Eureeka's Castle as a successor series to Pinwheel. 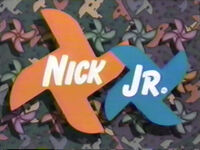 Commercial for Pinwheel on Nick Jr. 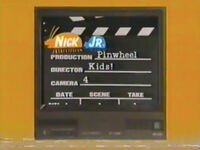 Another promo for the show 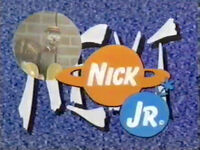 The owner of Pinwheel House is Aurelia, a motherly fortune teller puppet. The basement of Pinwheel House is home to Ebenezer T. Squint, an inventor and part-time magician who likes to cause trouble. The attic room is inhabited by Plus and Minus, a pair of playful twin boys.

The house's live-action residents include Coco (a mime who is great at fixing things), Jake (a musician who has many small boxes that emit sound effects), Kim (an artist who is always painting things she sees), and the elderly couple Sal and Smitty (who run a newspaper called The Daily Noodle). Living outside the house are the puppets Luigi (owner of a fruit and veggie stand), Molly Mole (a mole whose home is inside a tree), Silas the Snail (a slow snail), the Hobo Bugs (a pair of bugs named Lulu and Herbert), and the Admiral Bird (a pirate bird who is a rare species).

In the show's first season, there were several other main characters, all played by Franci Anderson: the human storyteller Franci, a group of alien marionettes called the Wonkles, and a spider marionette named Spiderbelle.

The human characters are ordered according to the first season's credits, with later cast members added to the end.