Pixel is a main character in the Nick Jr. series LazyTown. He is voiced by Kobie Powell, who also provided the voice for most Nick Jr. sound bites and promos from 2004 to 2009.

Pixel has red-orange hair. He usually wears a shirt with his name printed on the front, baggy jeans, black/white sneakers, a blue visor with silver antennae, and a belt containing various gadgets.

Pixel is a computer genius and inventor who is almost always in his lab. He loves to create different gadgets that keep him from doing physical activities himself, such as a machine that automatically ties his shoes or one that plays sports for him. When he is not coming up with a new idea for an invention, he usually plays one of his many video games. He has a crush on Stephanie and will usually only play outside if she is there.

Pixel represents antisocial behavior and too much time on the computer. Because of his obsession with technology, he is not well-prepared for relationships in the real world. He is the oldest of the kids at ten years old.

Part of his official description is as follows: "Pixel nearly short-circuits when faced with a simple question like: 'What’s your favorite color?' Or how he feels about Stephanie. He has such a crush; he almost can’t talk around her. Talk about computer malfunction!" 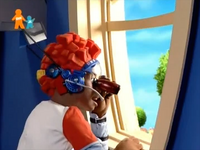 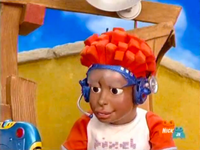 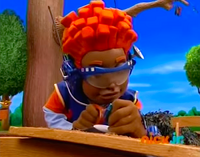 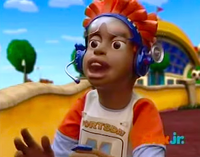 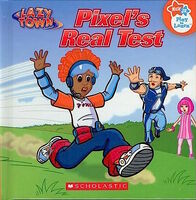