It was Nickelodeon's second computer-animated film to be rated PG by the MPAA, after Barnyard. The film received widespread positive reviews and was a box office success, grossing $245 million worldwide against its $135 million budget.

A pet chameleon (Johnny Depp) becomes stranded in the Mojave Desert, where he is directed by an armadillo to a town called Dirt. In the desert, he is pursued by a red-tailed hawk and hallucinates at length before meeting the desert iguana Beans, who takes the chameleon to Dirt, an Old West town populated by desert animals. There, the chameleon presents himself to the townsfolk as a heroic figure, under the name of 'Rango'. He soon runs afoul of Gila monster Bad Bill, but avoids a fight when Bill is scared off by the afore-seen hawk, and is himself pursued by the hawk until he accidentally crushes it beneath an empty water tower, whereupon the town's mayor appoints Rango the sheriff. Meanwhile, the townsfolk worry that with the hawk dead, the gunslinger Rattlesnake Jake will return. After discovering Dirt's water reserves nearly empty, Beans demands that Rango investigate; but later, Rango inadvertently assists a trio of bank robbers, led by the mole Balthazar, mistaking them for prospectors; and upon finding the water stolen, organizes a posse, who discover bank manager Merrimack dead in the desert from drowning, and later fight the robbers for the stolen water bottle, before discovering the bottle to be empty. Despite the robbers professing they had found it empty, the posse brings them to town for trial.

Rattlesnake Jake arrives and tells Rango to leave for good, so he does. Night comes, and Rango makes his way over the sand, arriving at the road with Mr. Tims and the doll from the beginning. He then crosses to the other side of the road. Rango confronts the mayor about his purchase of land around Dirt, who denies any wrongdoing and shows Rango that he is building a modern city with the purchased land. When Rango objects to this, the mayor summons Rattlesnake Jake, who humiliates Rango. Rango thence wanders from town until his encounter with a figure identified only as the 'Spirit of the West' or 'Man with No Name', who advises him that "No man can walk out on his own story". Guided by the armadillo and a set of mobile yucca schidigera, Rango learns that Dirt's water supply is controlled by an emergency valve in a water pipeline to Las Vegas Valley. Thereafter Rango challenges Jake to a duel while Balthazar's robbers and the yucca schidigera release the water-supply; but he and Beans are imprisoned by the mayor, who then attempts to kill Jake, having identified in him an aspect of the nearly-obsolete 'Old West', only to be foiled when Rango and Beans release themselves and the water-supply from his control. At this, Jake salutes Rango and departs, taking the mayor prisoner, while the other characters celebrate.

The film was produced by Nickelodeon Movies, Gore Verbinski's production company Blind Wink, and Graham King's GK Films. The CGI animation was created by Industrial Light & Magic (ILM), marking its first full-length animated feature. ILM usually does visual effects for live-action films.[6] It is also the first animated film for Verbinski. During voice recording, the actors received costumes and sets to "give them the feel of the Wild West"; star Johnny Depp had 20 days in which to voice Rango; and the filmmakers scheduled the supporting actors to interact with him.[7] Verbinski said his attempt with Rango was to do a "small" film after the large-scale Pirates of the Caribbean trilogy, but that he underestimated how painstaking and time-consuming animated filmmaking is.[6][7]

In a discussion about the nature of contemporary animated features, Verbinski said in December 2011,

"There are shackles with the budgets and the profit margins. You want to compete with what they're doing at Pixar and DreamWorks. There's a price tag with that just in terms of achieving that quality level. What happened to the Ralph Bakshis [the director of such adult-oriented animated movies as 1972's Fritz the Cat] of the world? We’re all sitting here talking about family entertainment. Does animation have to be family entertainment? I think at that cost, yes. There's the bull's-eye you have to hit, but when you miss it by a little bit and you do something interesting, the bull's-eye is going to move. Audiences want something new; they just can't articulate what.[8]"

The film was released on Blu-ray and DVD on July 15, 2011.[17][18] The release had been produced as a two-disc Blu-ray, DVD, and "Digital Copy" combo pack with both the theatrical and an extended version of the film, cast and crew commentary, deleted scenes, and featurettes.[19][20][21]The extended version adds a final scene with the flooded town now a beach resort renamed Mud, and Rango riding out to deal with news that Bad Bill is causing trouble elsewhere. 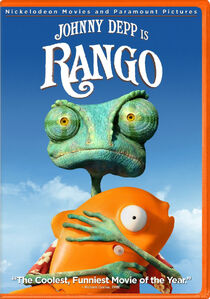 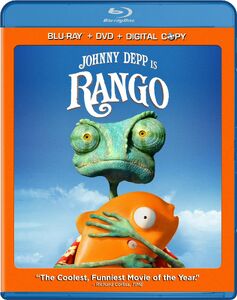 The film returned to theaters for a three-week engagement beginning January 27, 2012.[22]

Rango received positive reviews. It has an 88% rating on the film critics aggregate site Rotten Tomatoes, based on 200 reviews, with an average rating of 7.6/10. The site's consensus says, "Rango is a smart, giddily creative burst of beautifully animated entertainment, and Johnny Depp gives a colorful vocal performance as a household pet in an unfamiliar world." [23] Another review-aggregation website, Metacritic, reported that the film had been given an average review of 75 out of 100 (or 3 out of 4).[24]

With its distribution contract with DreamWorks Animation set to be concluded in 2012, Paramount Pictures, pleased by the performance of this film, announced plans to establish its own animation department.[32]

The Sacramento, California-based anti-smoking organization Breathe California regards the film a public health hazard; it said there were at least 60 instances of smoking in the film.[33]

Electronic Arts released a video game based on the film. It was rated E10+ and was released for the PlayStation 3, Xbox 360, Nintendo DS, and Wii.[37]

Funtactix launched Rango: The World, a browser-based virtual world set in the Rango universe, on March 4, 2011, the day of the film's release.[38][39] 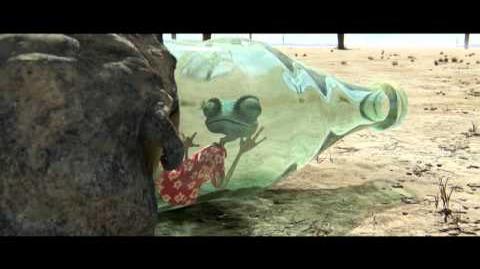 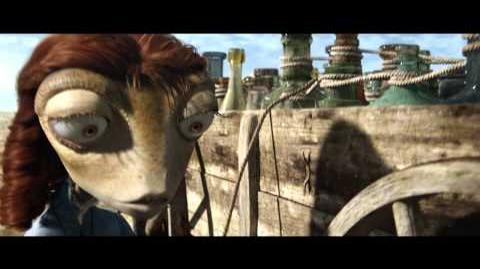 You ain't from around here - Clip from Rango
Clip #2 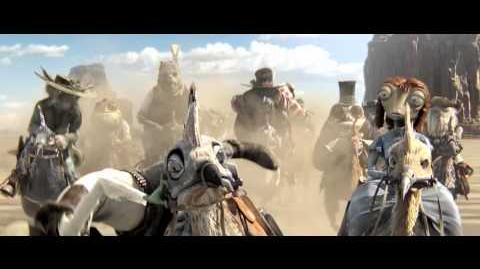 Rango - That means we ride
Clip #3 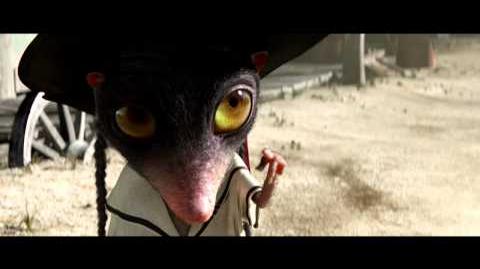 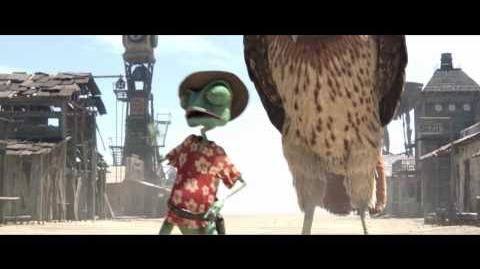 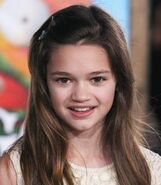 Ciara Bravo at the film's premiere.