"The 21st century is a very dangerous century."
―Rocko amending his old catchphrase.

Rocko's Modern Life: Static Cling is an animated web television special based on Rocko's Modern Life. It is the third film reviving a past Nickelodeon property, after the Legends of the Hidden Temple movie and Hey Arnold!: The Jungle Movie. In this special, Rocko must face the challenges of the 21st century when he sees his friends addicted to hip-hop, technology and more. The original main cast returned for the special. The special was originally expected to be released sometime in 2018.

When 2018 passed, Nickelodeon still didn’t confirm the official date for the special itself, making fans assume that it was delayed. In May 2019 Viacom president Robert Bakish revealed in a conference call that Netflix had acquired the rights to both Rocko's Modern Life: Static Cling and Invader Zim: Enter the Florpus. Several days later, Netflix confirmed both specials were releasing on their streaming service. Static Cling released on August 9, 2019.

After Rocko's house was launched into space at the end of "Future Schlock", Rocko, Heffer, Filburt, and Spunky have been adrift for 20 years doing nothing but watching old videos of The Fatheads episodes. Passing by Earth, Filburt realizes that the remote controlling the rocket has been stuck to Heffer's butt all along. They use the re-entry button and land back in O-Town, which they find has changed dramatically in the last 20 years. Heffer and Filburt quickly accept all the new technology, but Rocko is overwhelmed and secludes himself in his house. Bev Bighead comes to welcome him back to Earth, and when asked why he can't find The Fatheads on TV, she explains the show has been off the air for many years, much to Rocko's horror.

Meanwhile, Ed Bighead makes a clerical error due to a mishap caused by Rocko's re-entry. As a result, Conglom-O enters bankruptcy, along with all of O-Town. Ed is fired and his house is slated for demolition the next day. At Rocko's suggestion, the two return to Conglom-O and convince Mr. Dupette to bring back The Fatheads, claiming a revival will make enough money to save the company. Dupette accepts and rehires Ed, but then orders the Chameleon Brothers to direct a CGI-animated special. Convinced this new direction will ruin The Fatheads, Rocko decides to find the original creator, Ralph Bighead, who left on a journey of self-discovery years ago. Using a couch attached to a drone, he, Heffer and Filburt travel the world searching for Ralph, but their battery runs out and they crash-land in the desert. There, they find Ralph, who has transitioned and is now Rachel, running a Fatheads ice cream truck. Rocko begs Rachel to return to O-Town and bring back The Fatheads, and she eventually accepts for her family's sake.

Meanwhile, Dupette is displeased with the CGI Fatheads special and hires Rachel to take over when Rocko returns with her. Ed, however, becomes enraged and rejects Rachel's new appearance before storming out, leaving Conglom-O and the town in jeopardy. Rocko departs sadly, but Rachel resumes working on the special in spite of her father's words. Rocko finds Ed in his now-demolished house and the two discuss their shared fear and resistance to change. Rocko then receives a phone call from Heffer and Filburt, informing him that the Fatheads special is complete and about to air.

Rocko drags Ed to the premiere and the two begin to watch, only to discover that Rachel has added a new character to the show: a baby Fathead. Everyone but Rocko loves the new character, leading the special to make billions of dollars, and Ed, seeing the influence of their family life in the special, reconciles with Rachel. Rocko angrily states his disapproval of the special, believing it to be too different from the original Fatheads, but Ed convinces him that change is a part of life and should be embraced, which Rocko then accepts. The rocket that launched Rocko's house suddenly crashes into the Conglom-O building, launching it and Dupette into space, and the money earned rains down on the crowd, saving the town. Filburt reunites with his wife and kids, and Rachel and her parents leave for a new life together in her ice cream van. 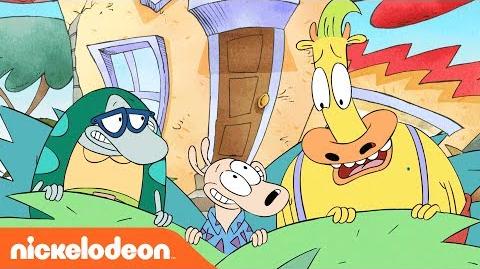