Member of the PAW Patrol

Recycling items, cleaning up the area, treats, belly rubs, being a mer-pup, having a faux hawk, snowboarding, pigs, fixing things, ducklings, his building blocks, being tickled, the color green

Water, getting wet (except when he's a mer-pup or when he's in his scuba suit), being sprayed by Marshall, baths, the colors pink and yellow ("Pups Save the Easter Egg Hunt"), the smell of a wet dog, being a Werepuppy ("Pups and the Werepuppy"), wolves, recyclables being wasted and/or thrown into the trash

Rocky is a character in the Nick Jr. series PAW Patrol. As of season seven, he has been voiced by four Canadian actors and debuted in the show's first episode, "Pups Make a Splash." His job is the mechanical worker pup.

Rocky has mostly gray fur with white paws, a white tip on his tail, and white tips on the fur tufts on his face. He also has a darker gray circle around his left eye and two dark circles on his back. His nose is black and his eyes are brown. Rocky's standard PAW Patrol uniform consists of a white and green baseball cap, a green jacket with an orange collar, and a "pup pack" that contains his tools for repairs.

Rocky's pup-pack contains a screwdriver and a claw. It also contains a variety of other tools, such as a glue bottle, coil of adhesive tape, spatula, and many others.

His Mission PAW pup-pack contains a radar scanner that can locate pups such as Chase, as shown in "Mission PAW: Quest for the Crown".

His Sea Patrol pup-pack carries a rescue buoy, and a metal detector, which he uses, despite his aquaphobia, to locate the lost rattle of the baby octopus after it was knocked underwater in "Sea Patrol: Pups Save a Baby Octopus". His pup-pack when in his scuba gear carries a welding tool, which he uses to help secure the new support for the Adventure Beach pier in "Sea Patrol: Pups Save the Pier". 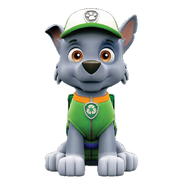 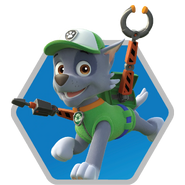 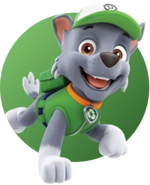 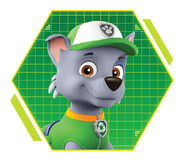 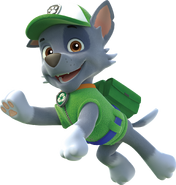 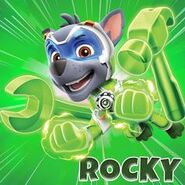