Rocky Rhodes is a minor character in The Mighty B! He is a 13-year-old skateboarder who works part-time as a waiter at Hilary's Café. In the episode "We Got the Bee", it's revealed that Portia has a crush on him. Rocky is a budding teen heartthrob: he's nice, cool, and in a rock band. Rocky plays bass for the Integritones, a teen garage band that would totally make it if they only could find a drummer that who would stick around for more than a week. Bessie was the drummer once, but she quits the Integritones in order to help Portia's band when Penny fainted from stage fright. It is also possible that he is friends with Ben, they did socialize in one episode. 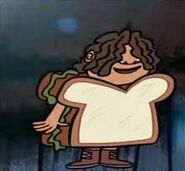 Everyone shouting for a surprise to Penny in her Bithday Party.

Add a photo to this gallery
Retrieved from "https://nickelodeon.fandom.com/wiki/Rocky_Rhodes?oldid=241320"
Community content is available under CC-BY-SA unless otherwise noted.