Roxy is a character in Winx Club who joined the cast in the fourth season. She is the strong-willed Fairy of Animals. Roxy often acts brave and tough, but as the youngest fairy, she is still prone to tears.

Roxy is voiced by Liliana Mumy.

Roxy has light skin and dark violet eyes. She has waist-length purple-pink hair with blonde tips. Her main outfit consists of a hot pink shirt with a pawprint symbol worn over a green crop top, short denim capris with a metal chain belt, and hot pink boots. Her Believix outfit consists of a sea green crop top with one sleeve; short shorts of the same color; a yellow-green belt with pink ruffles attached to it; a light green, fingerless glove; green platform boots with pink socks; and large wings with green and pink designs.

Before leaving the city for college, Roxy lived in Gardenia with her father and her beloved dog Artu. She works as a bartender at her father's Frutti Music Bar, and on the side, she operates a secret animal shelter in the bar's back room. She loves all animals, and according to her dad in episode 407, she thinks "the uglier and dirtier they are, the better." Roxy can identify spiders by their scientific names (episode 418) and almost always wears clothing with a pawprint symbol. As said in a tie-in book, Roxy is gifted in studying biology.

"Roxy is from Bloom's hometown of Gardenia, and she's one tough cookie! Although her caring nature and love for animals makes her the perfect Fairy of Animals, she has no problem sticking up for herself whenever she needs to. She's the last fairy from Earth and joins the Club after the Wizards of the Black Circle threatened to come after her. Although a bit hesitant at first, Roxy ends up leaving Earth to go to Alfea College and learn more about her powers thanks to her newfound friends." — Nick.com 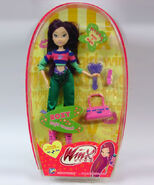 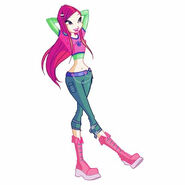 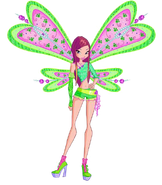 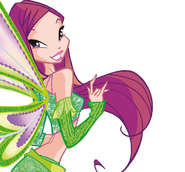 Add a photo to this gallery
Retrieved from "https://nickelodeon.fandom.com/wiki/Roxy?oldid=262927"
Community content is available under CC-BY-SA unless otherwise noted.