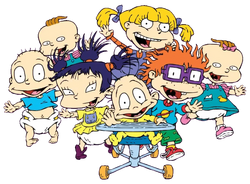 Rugrats is an animated series on Nickelodeon. It aired from August 11, 1991 to June 8, 2004. Produced at Klasky Csupo, Inc. in Los Angeles, the show centers on a group of talking babies and how they perceive the events happening around them. The first feature film based on the show, The Rugrats Movie, was released by Paramount Pictures on November 20, 1998.

The show was a huge hit and was the longest running Nicktoon until SpongeBob SquarePants took its title.

One episode does however show they live somewhere in California due to the license plate shown on Grandpa's station wagon. Also in the episode "Special Delivery", a post office has the state flag in front of it.

In the final issue of Rugrats Comic Adventures, it is implied that the Rugrats' city is not far from Ocean Shores, the main setting of Rocket Power, as the issue in question contains a story in which Reggie, Otto, and Twister travel to Tommy's house to babysit him and Angelica. Didi also mentions that she knows the Stimpletons.

The show originally revolved around a group of the little babies. The little babies are able to communicate with each other through baby speak, although viewers can understand them, because it is 'translated'. Often, they mispronounce words or use poor grammar and their speaking is full of errors. An example of this is using the word "poopetrator" instead of "perpetrator." The group is often reluctantly joined by Tommy's cousin, Angelica, the older woman she's three, Angelica is able to communicate and understand language from the little babies, which she often uses as an advantage when she wants to manipulate either party. She is usually very mean to the little babies. Susie, who lives across the street from the Pickles, is also able to communicate on the same level as Angelica, though she isn't manipulative. As a result, Angelica and Susie often clash.

Besides All Grown Up! there were plans for two other spinoffs that never made it to air:

Appearances in other projects

Lou Pickles made a cameo appearance in The Loud House episode, Linc or Swim, along with other elderly characters from other Nicktoons.

Tommy and Angelica were playable racers in Nicktoons Racing for PS1, PC, GBC, GBA, and arcade.

Tommy and Angelica were playable characters in Nickelodeon: Party Blast for Nintendo Gamecube, Xbox, and PC.

The Rugrats appeared in one of the loading screens of Nicktoons MLB for Wii, Nintendo DS, and Xbox 360.

Retrieved from "https://nickelodeon.fandom.com/wiki/Rugrats?oldid=261703"
Community content is available under CC-BY-SA unless otherwise noted.