The following is a list of episodes from the seventh season of Rugrats.

The series' second movie, Rugrats in Paris, was released early on in this season. The first three episodes of the season, which make up the "Acorn Nuts and Diapey Butts" three-parter, are set immediately before the events of the movie, and were later re-aired together as a movie. All episodes produced afterward would also feature a new intro sequence.

In this season, the show switched to having three segments per episode, consisting of the first segment being eleven minutes long, the second being two or three minutes, and the third being eight minutes. Additionally, all half-hour stories from this point on had two ad breaks instead of one. 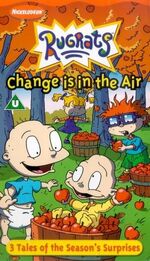 132B: Cooking with Phil and Lil

135B: The World According to Dil and Spike

137A: Changes for Chuckie

144B: The Way More Things Work

146-147: All Growed Up
Add a photo to this gallery
Retrieved from "https://nickelodeon.fandom.com/wiki/Rugrats_(Season_7)?oldid=260988"
Community content is available under CC-BY-SA unless otherwise noted.