For the video game, see Rugrats in Paris: The Movie (video game).

Rugrats in Paris: The Movie is the second theatrical movie spun off from Rugrats. The movie introduces the characters of Kimi, Kira, and Fifi the poodle, who were all incorporated into the TV series following the movie's release. This film was produced by Paramount Pictures and Nickelodeon Movies, and released into theaters on November 17, 2000, the same day as Dr. Seuss' How the Grinch Stole Christmas! was released. The film was a box office success, grossing an estimated $103 million worldwide, and having very positive reviews from critics. However, it grossed $40 million less than the first film. The VHS and DVD was released on March 27, 2001.

The film opens with a parody of The Godfather, at the wedding reception of Lou Pickles and his new wife, Lulu, whom he fell in love with in the three-part episode "Acorn Nuts and Diapey Butts". A mother-child dance during the reception saddens Chuckie, who realizes that he has lived most of his life without his mother, Melinda. His father, Chas, shares Chuckie's loneliness. Meanwhile, Tommy's father, Stu, is summoned to EuroReptarland, a Japanese amusement park in Paris, France, to fix the Reptar robot that he had built for them in the aforementioned three-parter, as it is malfunctioning. Tommy, Chuckie, Phil and Lil, Angelica, Dil, their dog Spike, and all their parents travel to Paris to take a vacation at the park.

At EuroReptarland, Coco LaBouche, the cold-hearted, child-hating head of the park, yearns to be the head of the entire Reptar franchise after her boss, Mr. Yamaguchi, resigns as the president. Yamaguchi says that his successor has to love children to be able to do the job, so LaBouche lies to him, claiming to be engaged to a man with a child. Angelica overhears a conversation between Coco and Yamaguchi before being caught. To save herself from punishment, Angelica reveals that Chas is looking for a wife and suggests that Coco marry him. Coco strikes up a relationship with Chas, but her attempts to bond with Chuckie fall flat, as she tends to show her true colors to the kids when Chas isn't looking.

The adults and babies also meet Coco's much-put-upon assistant Kira Watanabe and her daughter, Kimi, who both hail from Japan, but are now living in France. Kira, who works as Coco's assistant at the park, develops a mutual attraction to Chas, but tries to help Coco win his affections, completely unaware of Coco's true intentions at this point. Kira also tells the babies the in-universe origins of Reptar, explaining he was a feared angry monster, until a princess revealed his gentler side to make the frightened humans like him. Meanwhile, Spike gets lost in the streets of Paris and falls in love with a stray poodle named Fifi.

Chuckie decides the princess from the story should be his new mother, and is aided by his friends to reach an animatronic replica of the princess in the park, but they are stopped by Coco's ninja security guards. Later, at the premiere of the show featuring Stu's Reptar robot, Angelica informs Coco of Chuckie's wish, so Coco sneaks backstage and takes the spotlight as the princess, luring Chuckie into her arms to make her seem wonderful with children. Chas is thrilled, thinking she would make an excellent mother and decides on the spot to marry her, much to everyone's surprise, including his friends.

On her wedding day, Coco, aided by Jean-Claude, traps the children in a warehouse, and takes away Chuckie's teddy bear, Wawa. Kira, seeing this happen, finally realizes that Coco really doesn't care about Chas or Chuckie at all and tells her off, saying that she's going to tell Chas the truth, but Coco responds by throwing her out of the car. Meanwhile, in the warehouse, Chuckie feels miserable doesn't think having a princess for a mother was right for him, because he wants a nice mother like his friends have. After Angelica confesses that it's her fault that they're in this mess, Chuckie rallies the children to crash Chas' wedding at the Notre Dame cathedral, using Stu's Reptar robot. During this, they also pick up Kimi, who was at a nearby daycare center and was the only one there who didn't flee in terror when she saw the giant Reptar show up (much like the princess from the story). However, the little babies find themselves pursued by Jean-Claude, who is driving a tank robot of Reptar's nemesis, Robosnail. Pandemonium breaks out as the little babies make their way to the cathedral, including being swung around in midair by Robosnail and rocketing up the side of the Eiffel Tower. Eventually, Chuckie takes on Robosnail and tosses him into the Seine river.

Just as Chas is about to reluctantly marry a steaming Coco, Chuckie bursts into the church, screaming "NOOOO!", the first word he's ever said in the adults' presence. Coco pretends to be happy to see Chuckie, but just then Jean-Claude bursts in and accidentally reveals Coco's true nature to everyone by announcing that her kidnapping plot had failed. Chas, finally seeing Coco for the wicked liar she really is, angrily calls the wedding off, and Angelica divulges Coco's plan to Yamaguchi, who is also in attendance. Yamaguchi fires Coco from EuroReptarland, and when Coco tries to leave, Angelica steps on the train of her wedding dress, ripping it to reveal Coco's underwear. Spike chases the humiliated Coco from the cathedral with Jean-Claude in tow. Kira arrives at the church, returns Wawa to Chuckie, and professes her love to Chas. Chas and Kira fall in love and get married upon returning to America, and Spike's new girlfriend, Fifi, is adopted by the Finster family. Chuckie gets Kira as his new mother, and Kimi as his new sister, thus concluding one of the series' longest-running plotlines.

A soundtrack for the film was released on November 7, 2000.

The film was a box office success: it grossed domestically $76,507,756 and $103,291,131 worldwide out of its' $30 million budget, doubling the budget in domestic box office results and tripling the budget in worldwide box office results. This film was released on November 17, 2000, the same time as the live-action adaptation of Dr. Seuss' How the Grinch Stole Christmas! This film was received more positively than the first film critically but wasn't as successful in the box-office. 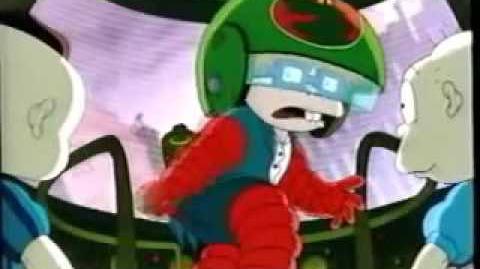 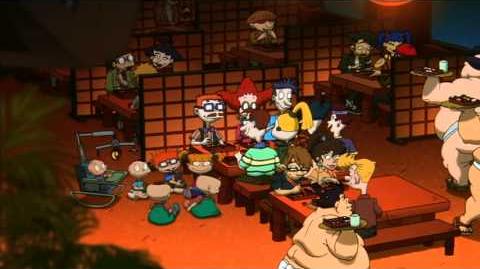 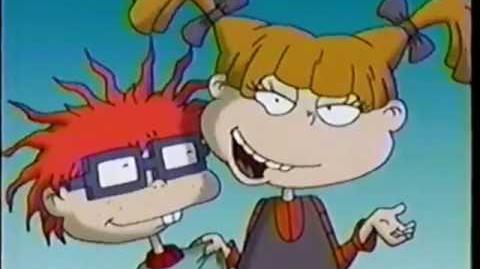 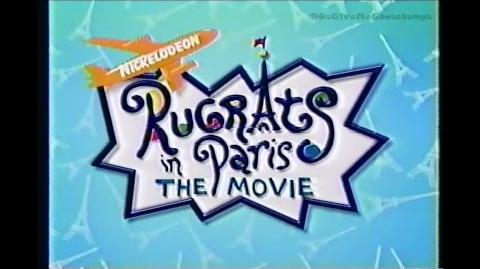 Rugrats In Paris Commercial
Rugrats in Paris: The Movie Chuckie's Commercial TV Spot.
Add a photo to this gallery

Print ad for an applesauce promotion

Add a photo to this gallery
Retrieved from "https://nickelodeon.fandom.com/wiki/Rugrats_in_Paris:_The_Movie?oldid=232177"
Community content is available under CC-BY-SA unless otherwise noted.