Nickelodeon
Register
Don't have an account?
Sign In
Advertisement
in: The Loud House characters, The Casagrandes characters, Humans,
and 9 more
English

Rusty Spokes
The Loud House and The Casagrandes character

"Ha! You can't beat the Rust Man that easily!"

Rusty Spokes is a character from The Loud House. He is one of Lincoln Loud's best friends and also the older brother of Lucy's crush, Rocky Spokes. He is introduced in the episode "Hand-Me-Downer" as a member of a local bicycle gang, alongside Papa Wheelie and Flat Tire. Although he at first seemed like a mean kid due to his laughing at the girly bicycle that Lincoln owns (which was given to him by Lori), Rusty's subsequent appearances show him having become a close friend of Lincoln, while Papa Wheelie and Flat Tire have rarely appeared since.

According to the episode "Everybody Loves Leni", Lincoln started hanging out with Rusty and Zach (presumably sometime after the events of "Hand-Me-Downer"), and then brought them together with his other two friends, Clyde and Liam, when the latter two felt left out.

Contrary to the common stereotypes of a biker gang member, Rusty is somewhat overly sensitive, as he apparently once cried when a bird flew into the school gym (as mentioned by Lincoln in "The Price of Admission"). He is also caring towards his brother Rocky, to the point that he faints in horror when he sees Rocky covered in fake blood in "Back in Black". Rusty also thinks he knows all there is to know about girls and frequently attempts to flirt with girls (including Lincoln's sisters, whose names and personalities he tends to get mixed up), though Polly Pain from "Dance, Dance Resolution" seems to be the only girl he has ever actually had any luck with. 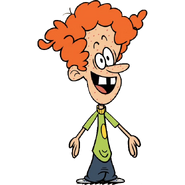