watch 03:27
Wiki Targeted (Entertainment)
Do you like this video?
Play Sound

Scene but not Heard was a comic strip created by Sam Henderson which ran in Nickelodeon Magazine throughout its sixteen-year run. It is about a man and a bear who play pranks on each other, and the comic contains no dialogue or sound. Selected comics were later published in a book in 2013.

When the comic first started in 1993, it was unnamed, and in 1994 it was called "Yet Another Wacky Silent Comic." In 1995 the name "Scene but not Heard" first appeared.

Many comics had a theme which corresponded to the magazine issue's theme or the time of year. For instance, October 1995 had a halloween theme, November 2005 had a wizard theme to match the Harry Potter cover, and in March 2006 the comic was meant to be viewed in 3D with the attached 3D glasses.

In the April 2000 issue, Nickelodeon Magazine published an interview with the author - but with his answered depicted with a series of pictures, including one of the only two instances of the man and the bear actually speaking. The other time the man and the bear spoke was in an "outtake" seen in a special comic published for the magazine's tenth anniversary in the August 2003 issue.

In the April 2001 issue, Henderson wrote a comic story about working in Los Angeles to work on the show SpongeBob SquarePants.

Holiday 1993 - Here the comic is unnamed

November 2005 - with a wizard theme to match the Harry Potter cover.

December 2009 (Last Issue)
Add a photo to this gallery

Henderson's story in the April 2001 issue about working on SpongeBob SquarePants in Los Angeles. 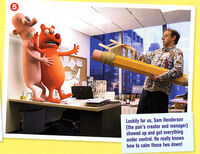 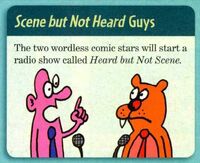 The Scene but not Heard characters' future according to an article in the last issue of Nickelodeon Magazine.
Add a photo to this gallery
Retrieved from "https://nickelodeon.fandom.com/wiki/Scene_But_Not_Heard?oldid=302902"
Community content is available under CC-BY-SA unless otherwise noted.