Shaman Mnyambo is the witch doctor who gave Eliza the power to talk to animals in The Wild Thornberrys. He was voiced by Kevin Michael Richardson.

Prior to the series, Mnyambo was a high shaman from a tribe who believed that Animal and Human spirits joined, but was known to have a hatred for animals, and after eating the really high shaman's prize sheep, he was punished by being put under a spell to be a warthog and the only way to reverse it is for a human, who really cared for him, to save him. and and he believed that no one would care for an ugly warthog like him.

He made his first appearance in the flashback episode "Gift of Gab", when an Eliza freed him from a trap, only to see that he transform into a human. Mnyambo was grateful to Eliza for saving him and breaking the spell and granted her wish; the ability to talk animals. Unfortunately, the ability to talk to animals came with a price: Eliza could only speak animal and not human. When Eliza said that he messed up the spell, Mnyambo revealed that he actually granted her wish to talk to animal but can't do a spell to make her talk to both animals and human. However, after saving both Eliza and Darwin from falling from the cliff (as Eliza tried to save Darwin), Mnyambo decide to cast a very hard spell that would allow her talk to both humans and animals, but warned her that is she tells anyone about her secret, the powers would go away forever. 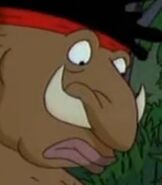 Add a photo to this gallery
Retrieved from "https://nickelodeon.fandom.com/wiki/Shaman_Mnyambo?oldid=212190"
Community content is available under CC-BY-SA unless otherwise noted.