Nickelodeon
Register
Don't have an account?
Sign In
Advertisement
in: Character stubs, The Fairly OddParents characters, Humans,
and 6 more

"A Mile In My Shoes"

Being nice
Sheldon Dinkleberg is the Turner family's next-door neighbor on The Fairly OddParents, whom Mr. Turner greatly despises.

Dinkleberg and Turner have an ongoing rivalry, since the Turners have a child, Timmy, and are unable to afford many of the fancy things that the Dinklebergs can, such as a robotic lawnmower and a high-powered barbecue. This rivalry has expanded to involve all members of both families, not just Mr. Turner and Sheldon, although Timmy is mostly indifferent or annoyed by this family feud. Sheldon is married to Mrs. Dinkleberg, his unnamed wife.

In later seasons, Mr. Dinkleberg has been made into an exceedingly perfect neighbor who is nice to the Turners, overly charitable and generous, and is extremely helpful, making Mr. Turner's hatred of him appear far less rational. His role was also increased, being included as an active character in more episodes, even getting major roles in Season 7's "Operation Dinkleberg" and Season 9's "Dinklescouts".

Sheldon has gray hair and is typically seen wearing a yellow (sometimes plaid) shirt with blue jeans. In his youth, he had blonde hair.

The Dinklebergs do not seem to be aware that the Turners hate them, and the Turners' rarely openly show this to the Dinklebergs, instead opting to growl behind their backs or engage in "friendly" competitions (which the Turners usually lose because of Timmy).

Mr. Turner and Sheldon have been one-sided "rivals" since childhood. Before Mrs. Turner married Mr. Turner, she dated Sheldon. However, when Sheldon Dinkleberg struck it rich by inventing parachute pants, he quickly dumped Mrs. Turner for a more extravagant life. It is unknown how or when he met Mrs. Dinkleberg.

Mr. and Mrs. Dinkleberg have lived next door to the Turner house since Mr. Turner threw a "For Sale" sign onto the house in which the Dinklebergs previously lived. Their house is bigger, more expensive, and is kept in better condition than the Turners'. Mr. Turner once attempted to destroy Sheldon's house with a rocket launcher that Timmy brought from inside the television, but it was out of ammunition, so he and his wife left to go get some while they left Timmy punished and miserable due to Vicky framing him for things he didn't do. Timmy got so angered that he decided to run away into the television. Mr. Turner returned with ammunition, but it is not known if he launched any of the rockets at Dinkleberg's house. Timmy's dad once got so enraged about three things happening in one day (his ties having different colors, no milk in the milk carton and the weather forecast in the newspaper saying it would be rainy on the newspaper even though it was sunny outside) that he launched Operation Dinkleberg by re-modeling Timmy's room into a spy headquarters. Dinkleberg seemed to be evil at first, as shown close to the end, but in the end, he was only pretending to be evil to make Timmy's dad happy. He gave Timmy a new bicycle and some money and he told Timmy to buy his dad some new suspenders, since for most of the episode, he had his pants down. 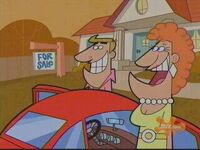 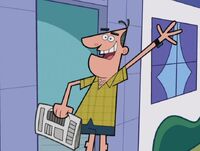