Owner of the Chum Bucket

Sheldon J. Plankton is Mr. Krabs' nemesis and the main antagonist in SpongeBob SquarePants. He operates a struggling restaurant called the Chum Bucket, located directly across the street from the Krusty Krab. His primary goal in the series is to steal the Krabby Patty recipe and put Mr. Krabs out of business. Plankton succeeds at stealing the recipe in the movie, but his goal of world domination is thwarted by SpongeBob. In "Friend or Foe," it was revealed that Mr. Krabs and Plankton were once best friends, but a dispute over the Krabby Patty recipe ended their friendship.

Plankton has spent a long period of time trying to destroy the Krusty Krab, a franchise owned and operated by Mr. Krabs. He's married to a computer named Karen. He always comes short of getting the Krabby Patty formula.

Plankton is afraid of whales, enough to go insane. The reason is because a pod of whales ate his ancestors, as plankton are part of the normal whale diet.

Plankton's best friend from birth was his future rival Mr. Krabs. This history was revealed in "Friend or Foe." Plankton and Krabs were considered outcasts by other kids because Krabs was poor and Plankton was a nerd. When they discovered that money could bring them out of their poverty, they decided to make money selling hamburger patties, and set up a mini-restaurant in the local dump. At first, their burgers weren't successful; the first of their patties was tried by Old Man Jenkins, who was knocked out by the contaminated burger. Plankton started complaining about how Jenkins had been old and not able to handle the patty. Offended by this, Krabs tried to take the recipe from Plankton to improve upon. Plankton wanted to do this himself, but he only ended up with the corner of the recipe, which read: "And a pinch of chum." Plankton stormed out of the restaurant, and went to create his own recipe, using only his memory, the corner of the recipe, and science. At school, Plankton tried to sell his chum burgers in a chum bucket and failed, when Krabs succeeded with his Krabby Patties, which he had created by accident when Plankton had slammed the door. Ingredients fell in the patty batter, thus creating the patty. Plankton later named his restaurant the Chum Bucket, after the secret ingredient of the original unsuccessful patty recipe. Mr. Krabs named his restaurant the Krusty Krab. To this very day, Plankton has been single-mindedly obsessed with obtaining the Krabby Patty formula and running the Krusty Krab out of business, often going to incredible and often ridiculous lengths to do so; in "SpongeBob's Last Stand," for example, he builds a massive highway that goes straight through Jellyfish Fields and over the Krusty Krab, leading right to his restaurant simply to do so.

In "Dunces and Dragons," it was implied that the fight between Plankton and Krabs began centuries ago when Plankton's evil overlord ancestor Planktonamor was vanquished by a Krabby Patty. Since there's not any feud between Krabs and Plankton in their early childhood, it's possible that these families settled their differences until the childhoods of Krabs and Plankton.

In a comic story, Krabs and Plankton are shown to have been college roommates. Their rivalry is shown to have been caused by a series of events, including Plankton being stepped on by Mr. Krabs, which didn't annoy him at all, being closed inside Mr. Krabs' book, which aggravated him a little, and Mr. Krabs going out with his date and Plankton's date, which marked the official start to their rivalry. Since it was revealed in "Friend or Foe" that they were rivals earlier than college, this story is likely non-canon. Even in the present day of the series, Krabs and Plankton are occasionally shown to somewhat get along, such as in "New Leaf" and "Best Frenemies."

Plankton's restaurant, the Chum Bucket, has always been extremely unsuccessful, not only because of competition from the Krusty Krab and Plankton's rude and cruel treatment of the people in Bikini Bottom, but also due to the extremely poor quality of the food and Plankton's constant failure to clean the place up. As its name implies, the Chum Bucket serves chum-based foods, all of which taste terrible. In "Plankton's Regular", the Krusty Krab adds chum to its menu in an attempt to steal Plankton's single regular customer (who was in reality being paid by Karen to eat at the Chum Bucket and pretend to like the food there). The customer is disgusted by their chum, and says that it is the second foulest thing he has ever tasted (it can be inferred that Plankton's chum is the number one worst). This implies that chum is inherently disgusting, and cannot be made to taste good, although is shown to be false in the Season 7 episode "Greasy Buffoons." Plankton used excess grease from the Krusty Krab's grease trap that was dumped near the Chum Bucket to make his sales skyrocket, although it is unknown if this made the chum taste good, as Plankton could have been lying, and his customers could have been tasting only the grease, as the flavor could have covered up the chum's flavor.

It should be noted that in real life, chum is made of grounded up fish parts that are inedible to humans, such as heads and guts, and is used as bait for sharks and similar creatures. This would mean that Plankton is killing fish (or at least collecting dead fish) and serving their remains to other fish. This has only ever been touched upon in "The Krabby Kronicle," where SpongeBob prints a story claiming this. However, SpongeBob was being tricked by Mr. Krabs into printing absurd lies to appeal to customers, and this story was supposedly false. It also possible, that in the alternate reality the show takes place in, chum might be made of something completly different (although still likely disgusting), like in the episode Spongicus, Plankton named of many weird things that make up his chum, and fish parts was not on the list.

Plankton has no regular employees, and runs the Chum Bucket entirely by himself, although he spends most of his time in his laboratory, due to having no customers. Plankton actually runs the restaurant only when he has potential customers. Also, when he does have customers, he also uses artificialy intelligent machines to cover the other positions.

Although it has been stated on multiple occasions that Plankton has never had a single customer, he has on several occasions had brief success, particularly in more recent episodes, such as "Spongicus" and "Chum Caverns." A fan once wrote to Stephen Hillenberg, questioning that, due to Plankton being a genius in the fields of robotics, inventions, and technology (including many other fields), why Plankton dosn't sell computers and the like instead of fast food (which would actually probably bring him much better success)? Hillenberg answered this with that Plankton has never gone this route, simply due to him having never thought of it before, and also due to the fact that Plankton is slightly incompetent, and also that he has terrible communication skills, he would probably ignore the person's idea until the last minute.

Plankton's "wife" is his computer system Karen, even though neither of them fully consider the other their true soulmate, and their relationship is a very troubled one, although it was slightly mended by the events of the episode, ((Komputer Overload)). Being a microscopic organism, Plankton's biological family numbers in the thousands. In "Plankton's Army", he recruits his entire family to help him steal the formula, thinking them all to be criminal masterminds like himself. However, much to his surprise, his family consists entirely of uneducated, red-necked hillbillies. These Relatives include (but are not limited to): Clem Plankton, Zeke Plankton, Rufus Plankton, Jeke Plankton, Billy Bob Plankton, Billy Jim Plankton, Billy Billy Bo Willy Banana Fanna Fo Filly Plankton, Doug Plankton, Ennis Plankton, and Rainchild Plankton, the only ones named.

Plankton has two known ancestors. One is the evil wizard Planktonamor, who lived during medieval times and appeared in "Dunces and Dragons". Another is Dead Eye Plankton, a wealthy citizen who attempted a hostile takeover of Bikini Gulch but was defeated by Sheriff SpongeBuck SquarePants. Dead Eye Plankton lived during the Wild-West era and appeared in "Pest of the West".

Plankton appears in virtually all SpongeBob-related video games, usually as a major antagonist. 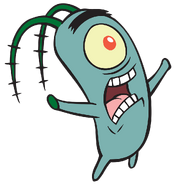 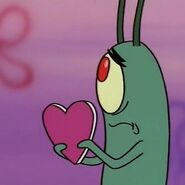 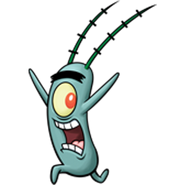 Retrieved from "https://nickelodeon.fandom.com/wiki/Sheldon_J._Plankton?oldid=118029"
Community content is available under CC-BY-SA unless otherwise noted.