Nickelodeon
Register
Don't have an account?
Sign In
Advertisement
in: Character stubs, My Life as a Teenage Robot characters, Humans,
and 14 more

Sheldon Lee
My Life as a Teenage Robot character

Sheldon Oswald Lee is a character from My Life as a Teenage Robot. He is a nerdy teenage boy who has a crush on Jenny Wakeman. Though his romantic feelings for her are not often reciprocated, Jenny considers Sheldon a close friend, and has shown affection for him on numerous occasions. Sheldon is skilled in robotics and has created gadgets and modifications for Jenny, usually very unnecessarily bulky and extravagant, as well as doing minor repair work.

Sheldon made his debut appearance in the episode "Attack of the 5½ Ft. Geek".

Sheldon is a "geek" stereotype, heavily invested in both science and comic book culture. His major character trait is his obsessive crush on Jenny. Despite the extent of his affection, he never is able to get Jenny to go out with him, and the two are simply close friends. Whilst normally sweet-hearted and intelligent, Sheldon easily becomes jealous of any boy who shows affection for Jenny, and is somewhat possessive of her.

Sheldon is also a budding engineer, inventor, and scientist, and often invents useful gadgets for Jenny in the hope of impressing her. He also created a robot superhero alter ego, “The Silver Shell”, in an attempt to show Jenny that robot boys would not be a good match for her — but this backfired when she actually fell in love with The Silver Shell.

Jenny sees Sheldon as a very smart and sweet boy and a faithful friend who is always eager to lend a her a helping hand, although he can sometimes get himself into trouble. Jenny also relies on Sheldon to fix malfunctions that her Mom is either too busy to or unable to fix.

Despite seemingly not returning Sheldon's deeply romantic feelings for her, Sheldon remains one of Jenny's closest friends whom she often hangs out with. Jenny has even shown genuine affection for Sheldon (even if it is platonic rather than romantic). In A Robot For All Seasons Jenny kissed Sheldon on the cheek while holding up mistletoe as a heartfelt thank you for Sheldon being the only one in Tremorton to never lose faith in her, thus saving her reputation as a superhero, and freeing her from Todd Sweeney’s evil mind-control device. Jenny kissed Sheldon a second time in Agent 00' Sheldon after he saved her and all of the robots in Tremorton from a top-secret organization bent on eradicating them. Throughout the series Sheldon has saved Jenny quite a few times and helped her fight off villains, thus she became deeply grateful for Sheldon's loving friendship and utmost loyalty to her. 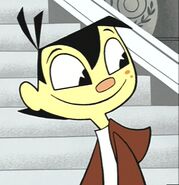