Eagles, bunnies in danger, being lost, wearing a cone

Her job is usually based on flying and lookout, and she rides a helicopter. Skye always makes her landings graceful with flips. Her grace and her excellent memorization skills helps her do well at Pup Pup Boogie, she tells Chase she has a trick of saying the Pup Pup Boogie moves out loud. Skye is very lovable and emotional (shown in "Pups Save the Bunnies").

Skye is a smart Cockapoo who loves to fly in her helicopter or with the wings in her pup pack. She tries everything with a backflip, grace, and a smile.

Skye is fun-loving and loves to play and participate in fun activities with her fellow PAW Patrol friends such as Pup Pup Boogie. However, she and Zuma can be competitive against each other. She is quite energetic, best emphasized by her giggle-bark and penchant for doing backflips. Skye is very brave and smart. Skye also has a fear of eagles, as seen in "Pups Save a Toof".

She has a soft spot for cute animals, especially bunnies. She often gushes over them when they're in sight. Like Rubble, she is sweet towards little kittens as long as they're not the Kitten Catastrophe Crew.

She's more feminine in behavior than Everest and loves getting her fur styled at Katie's salon. She loves pink and is rather fond of dressing up femininely, especially on Halloween.

Skye is an adorable pup with pink colored eyes. She has a special pilot outfit in the color pink. Skye is the youngest and smallest of the pups, and she is the first female member of the PAW Patrol. Her shaggy ears, her tail, the fluff on her head, and the circles around her eyes are a golden-brown/orange color. Her legs, snout, and belly are a cream color. The rest of her body is golden-brown. Her nose is brown and so are her eyebrows. She has three small eyelashes and fluff on her forehead.

Skye's pink vest comes equipped with a pup pack. When activated (by a bark), the pup pack transforms into a set of wings, and jets to help Skye fly.
Her Mission PAW pup pack contains a suction cup launcher that can grab objects such as crowns. It also provides a set of wings to allow her to fly on missions, such as investigating a rumor that Barkingburg Castle was haunted.

Skye has a pink helicopter with a harness in the back. Only Ryder, Marshall, Rocky, Mr. Porter, Alex Porter, Danny, Luke Stars and Ace Sorensen have used the harness. Skye's helicopter contains a cable that can be used to pick up out-of-reach objects. The vehicle number is 04. During later missions in the jungle, Skye's helicopter is painted in camouflage and takes a more jungle-themed appearance, adding a pair of pontoons to the sides of her helicopter alongside the wheels.

Skye's Mission PAW vehicle, dubbed the "sky cycle", is a motorcycle that can transform into a four-wheeled flying hovercraft.

With the opening of Adventure Beach and the pups being assigned their Sea Patrol duties, Skye was given a new seaplane to help protect the beach. The plane comes with a scoop she can use to swoop in and rescue anyone in trouble.

Skye is the only flying pup, with her jet-pack set and her helicopter. Skye is a great dancer, and she can do backflips with grace. Her goggles have built in binocular-like lenses. Whenever Skye jumps, she almost always does a backflip. 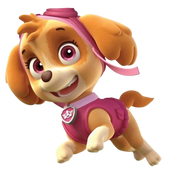 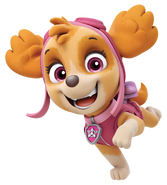 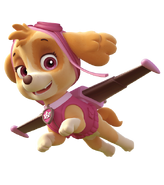 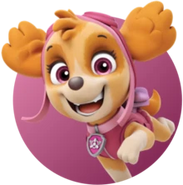 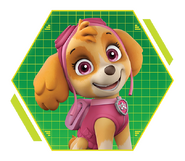 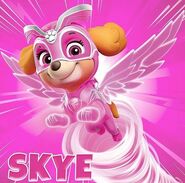