Slime Time Live is a television series that aired on Nickelodeon from January 24, 2000 to July 2, 2004, lasting eight seasons. It was hosted by Dave Aizer, Jonah Travick and Jessica Holmes and produced/directed by Jason Harper. It was located outside (inside if either weather did not permit, or the outdoor area had become too messy from earlier in the day) of the former Nickelodeon Studios at Universal Studios Florida (the third-to-last show to do so). It mainly aired as filler during regular commercial time.

The show holds two Guinness World Records – most people pied in three minutes (1000 in 2001), and most people slimed (762 on the finale). The sliming was done outdoors in front of the studios.

The show was also known to have their audience members, contestants, hosts (notably Jessica), celebrity guests, and staff caught on-camera pied in the face. When it was cancelled, Nick's pieing trademark was forgotten but was later revived through the Nick-themed resort and cruise line.

During the show, viewers would phone in to play interactive games with players on the show. The most common game was to make a match of Nicktoons from off of a Tic-tac-toe grid. The board was scrambled before game play and if a match was made, the home player would win a prize and the contestant would be slimed and often pied as well. In addition to Nicktoons, the board included a pie tile (the contestant would shove the pie they are holding in their face), and a "cream blaster" tile (where the contestant would be blasted with whipped-cream by the two side cannons). Rarely, a tile called the bonus would appear on the board. if the phone contestant finds this tile, he or she gets another try.

More interactive games would be played as the run progressed. Many celebrities from other Nick shows appeared often.

Formally known as "Super Sloppy Slime Off," The Big Shaboozie was the show's end game. Below are changes made, over the years, to it while the show was on-air.

In "Super Sloppy Slime Off," two out of three teams (each team had three contestants), Jessica led one team and Jonah led the other, would stand under a trough filled with slime. Dave would ask a Nick-related question, if one of the in-house players answered the question, one of the contestants from the home player's team would be pied by their team leader; if they answered wrong, a contestant from the opposing team would be pied by their team leader. The team to have all three of their members pied would be slimed and (along with the home player) receive a grand prize.

Renamed "The Big Shaboozie," changes to the game included Dave asking Nick-related questions on the given topic (instead of random questions); all players would now wear goggles during the game—whether it was getting pied, slimed, etc. -- in addition to getting slimed (they often got slimed with other substances besides that), the members of the winning team would be blasted (front and back) with whipped cream.

This time, there only two players on each team. Each team takes turns deciding which number to pick on a Tic-tac-Toe board; if one team finds "the Big Shaboozie", they will win the game, but if they find "the Whammy", the opposing team wins.

For the final season, the show began recording prior to the days it was set to air, and aired in the morning hours. Nickelodeon had tried to gain young viewers in that time through this, but ratings declined shortly thereafter. The show would often "connect" (Florida to New York) with U-Pick Live, which would replace it later in the year.

On the grand finale, the show broke the world record for most people slimed at one time.

A year after the show's cancellation, Friday Night Slimetime premiered on Nickelodeon, but unlike the original version, its segments were prerecorded. It lasted for two back-to-back seasons and was hosted by Lil' JJ and Chloe Dolandis (who had previously hosted Nickelodeon SPLAT!). Nickelodeon had a talent hold on Lil' JJ and was forced to give him a show to finish out his contract. Because of this, Dave Aizer was brought on board as a writer and also occasionally announced the prizes. The most common prizes on it were either a bicycle or athletic balls. 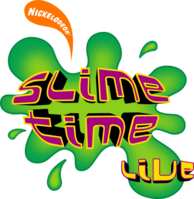 Logo used from January to September 2000 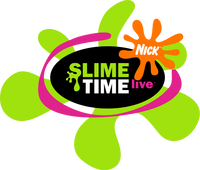 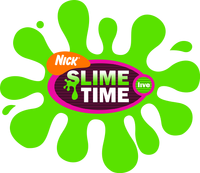 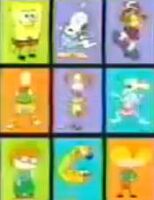 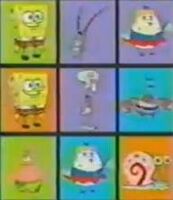 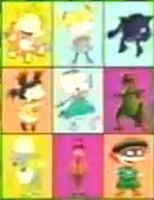 Rugrats in paris game board 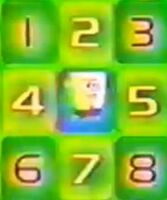 The first Game Board 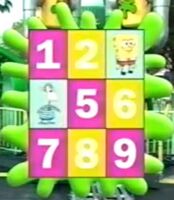 Style 1 of the game board 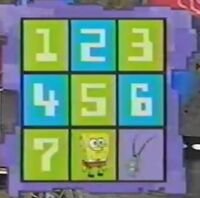 style 2 of the game board 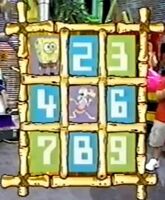 This style was used only during the Summer slime (Notice the bamboo bordering from SpongeBob.) 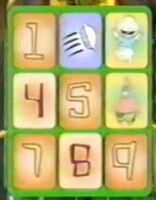 The second version of the game board