Slippery Soap, known as Slippery for short, is a lavender-colored bar of soap who lives in the bathroom of the Blue's Clues house. He often has trouble standing upright and is known for shouting his catchphrase "Whoa!" whenever he slides around.

He is always surrounded by a trail of bubbles. He dreams of becoming the captain of a boat when he grows up and likes to wear a blue sailor cap with an anchor emblem on it. He is best friends with Tickety.

In the original series, Slippery was voiced by two actors: Cody Ross Pitts in the first three seasons, and later Patrick Van Wagenen in the last three seasons. 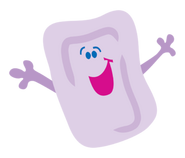