Start a Wiki
watch 01:50
The Loop (TV)
Do you like this video?
Southern Fried Fugitives (earlier "The New Adventures of the Southern Fried Fugitives") was a comic by Simon and Kim Deitch that ran in Nickelodeon Magazine from April/May 1994 until December 1999. It was about the adventures of four pieces of fried chicken brought to life by a thunderstorm - "A wing, a breast, a thigh, and a drumstick on the run in a world that hungers for their flesh!". The first panel of each strip had a cartoon drawing of each of the four pieces of chicken and reminded the reader of their names - "Chester", "Boom Boom", "Legs", and "Wing Nut."

December 1999
Add a photo to this gallery 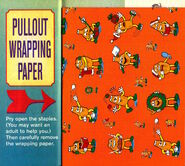 Pullout wrapping paper with the Southern Fried Fugitives was included in the December 1997 issue. 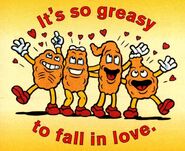 Valentine from the January/February 1999 issue.
Add a photo to this gallery
Retrieved from "https://nickelodeon.fandom.com/wiki/Southern_Fried_Fugitives?oldid=152422"
Community content is available under CC-BY-SA unless otherwise noted.